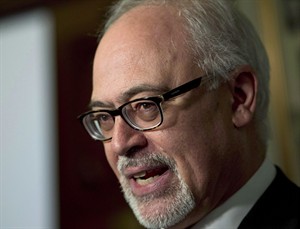 The fiscal reforms are expected to be revenue neutral for the province but should give a much-needed jolt to the economy, he said in Quebec City.

"That kind of reform would put us in the avant-garde in North America and would give a strong boost to economic growth," Leitao said. "We need that kind of boost to modernize our economy."

A 1 per cent increase in sales tax would generate roughly $1 billion a year for government coffers, Leitao said. And in order to offset the tax burden on Quebecers the government would first reduce income taxes by the same amount.

Leitao said Quebec City would introduce the income tax cut before a sales tax hike "a few months later" in order to assuage concerns the government was trying to sneak through a tax increase.

"If we do it — and I have the intention to do it, but I am not alone, I am not the king — we'll start by lowering income taxes," he said.

Leitao said the move is recommended in a report examining Quebec's taxation policies published in March.

The changes could be introduced in the next provincial budget and be implemented fully by 2018.

One of Leitao's staffers tried to downplay his minister's comments later on Thursday, telling reporters "we're only at the consultation stage. We didn't say we're going to do it, we didn't say we wouldn't."

Francois Bonnardel, a member of the legislature for the Coalition for Quebec's Future, said Thursday he worried government revenues would decrease due to a faltering economy, cancelling the benefits of a sales tax increase.

"We're going to follow this proposal closely but I am extremely skeptical that Mr. Leitao will be able to put this in place," he said.