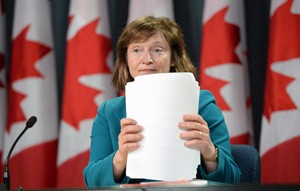 Suzanne Legault, Information Commissioner of Canada, holds a press conference in the National Press Theatre in Ottawa on March 31, 2015. The information commissioner is taking the Prime Minister's Office to court, accusing it of refusing to release documents about four senators embroiled in scandal, including Mike Duffy, Mac Harb, Patrick Brazeau and Pamela Wallin. THE CANADIAN PRESS/Sean Kilpatrick

TORONTO - The information commissioner is taking the Prime Minister's Office to court, accusing it of refusing to release documents about four senators embroiled in scandal.

The Canadian Press filed an access-to-information request to the Privy Council Office, the central bureaucracy serving the prime minister and cabinet, in August of 2013 asking for any records created since March relating to senators Mike Duffy, Mac Harb, Patrick Brazeau or Pamela Wallin.

The PCO identified 28 pages of responsive records, but withheld 27 of those pages, releasing just two emails in which its staff discussed similar access-to-information requests.

The Canadian Press went to the federal information commissioner, who found the complaint well-founded and recommended the prime minister release "a significant amount" of additional information.

But the Prime Minister's Office withheld the "vast majority" of the records and the information commissioner is now asking Federal Court to order the prime minister to disclose any records that don't warrant being withheld under certain sections of the Access to Information Act.

The Prime Minister's Office "erred in fact and in law" in relying on the aforementioned sections of the act to withhold the records, the information commissioner said in the court application.

A spokesman for Prime Minister Stephen Harper deferred comment to the PCO, but a spokesperson there was not immediately available to respond on Monday evening.

Brazeau, Wallin and Duffy were suspended over their expense claims while Harb resigned.

Duffy, Brazeau and Harb have been charged with fraud and breach of trust. Duffy pleaded not guilty to 31 counts of fraud, breach of trust and bribery at his trial, which is set to resume in November.

Brazeau's trial is scheduled to begin March 29, 2016. He has already pleaded not guilty to the charges.

Brazeau is also facing a separate set of charges — assault and sexual assault — arising from an alleged incident two years ago in the western Quebec city of Gatineau and has pleaded not guilty to the charges.

That trial resumes Tuesday when he is expected to testify in his own defence.

Wallin has been under lengthy RCMP investigation but has not been charged.