Kenney fires back at Calgary Mayor Nenshi over niqab ban 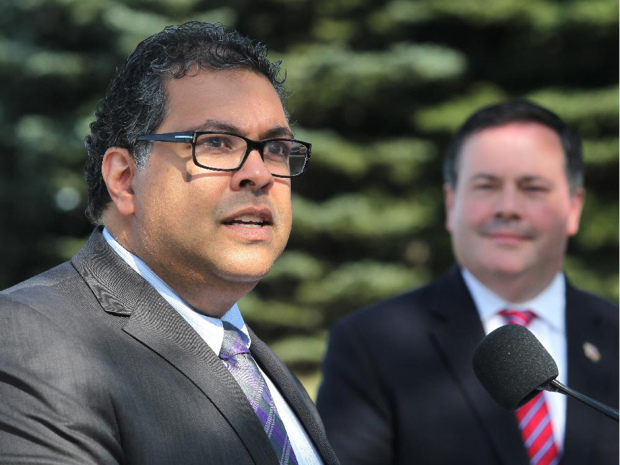 Minister of Defence Jason Kenney and Calgary Mayor Naheed Nenshi are now in a war of words over the niqab issue.

Kenney hit back at Nenshi’s statement that Stephen Harper is playing a “dangerous” political game with his position on the niqab and “dog whistle politics” by accusing the Calgary mayor of playing dangerous politics himself.

“If anything’s dangerous, it would be legitimizing a medieval tribal custom that treats women as property rather than people …” Kenney told the Calgary Herald earlier Thursday. “It seems to me that it’s the mayor and people like him who are politicizing it. I don’t think this should be an issue of contention.”

In an interview on SiriusXM’s “Everything is Political,” Nenshi told Evan Solomon that Harper’s decision to challenge the Federal Court of Appeal decision over the ability of a woman to wear a niqab during citizenship ceremonies is being done merely in the service of scoring political points.

“This is unbelievably dangerous stuff,” Nenshi said. “I spoke with a group of mayors and councillors from all over Alberta last week, and in my speech with all of these people from small town Alberta, I stood up and said this is disgusting and it is time for us to say stop it — to say this is enough,” Nenshi said.

He called out the Conservatives’ request for stay on the Federal Court of Appeal decision on the niqab.

“They are spending millions of millions of dollars of yours and my money on what is an unwinnable appeal in order to appeal to a certain political segment because they think the polls say that most people don’t want this,” Nenshi said.

Nenshi was complimentary on the stance both Thomas Mulcair and Justin Trudeau have taken on the issue.

Since 2011, two women have been denied the ability to take the citizenship oath without removing their face covering, Sonia Lesage, a spokeswoman for Citizenship and Immigration Canada told the CBC.

On the Syrian refugee debate, Nenshi was also very critical of the way Harper has approached the situation.

“This has been massively and disgustingly politicized,” Nenshi told Solomon. “I was happy that the Prime Minister in the last debate — the Munk Debate — didn’t go back to that tired security argument,” he said.

In response to Nenshi’s comments, Conservative Minister of Health Rona Ambrose tweeted on Wednesday that niqabs are a symbol of oppression.

“On this one Premier Notley is right,” Nenshi said. “Cap and trade systems have not been shown to work and if you want to price carbon, then I would listen to the CEO of Suncor who suggests a clean transparent carbon tax makes a bunch more sense than a cap and trade system that just creates jobs for traders.”

Nenshi is in line with the anti cap and trade position Alberta Premier Rachel Notley has taken, even though it contradicts the position held by Thomas Mulcair.

Mulcair has promised to put in place a cap and trade system to curb big polluters’ greenhouse gas emissions by 80 per cent by 2050.

Notley said Tuesday that while she is onside with the federal NDP’s plan to combat emissions, she’s wary of a cap and trade plan that would transfer capital outside of Alberta and favours a carbon tax on large emitters.

China under President Xi Jinping has proposed a plan for a nationwide cap and trade program.

But Nenshi was clearly insulted by the criticisms Stephen Harper has levelled at Premier Notley throughout the campaign for her policies on taxes, saying that Harper was essentially calling Alberta voters “stupid.”

“I’m not sure it’s great political strategy to tell people they are stupid for the government they elected five months ago. The polls are certainly showing that Premier Notley is still the second-most popular Premier in Alberta,” Nenshi said of Harper’s comments.

“As a politician, I’m not sure I should go to my voters and say, ‘Oh my gosh. You are so dumb. Can you vote for me now?’” he said.

Nenshi is part of a group of big city mayors pushing hard for massive investment in infrastructure in cities from all parties.