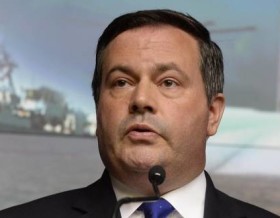 Jason Kenney denies he made a veiled reference to the religion or ethnicity of Calgary Mayor Naheed Nenshi when he told the Calgary Herald “it’s the mayor and people like him” who are politicizing the issue of the niqab.

“He’s a friend of mine. He knows how close I am to all of the cultural, ethnic and religious communities in Canada, particularly his own Ismaili community,” Kenney told Evan Solomon in an interview SiriusXM’s “Everything is Political.”

Kenney said it was “completely ridiculous” to suggest he was talking about Nenshi’s ethnicity or religion; Nenshi is a member of the Shia Ismaili community and is the first Muslim mayor of Calgary.

“I think I referred to politically correct liberals who were politicizing this issue,” Kenney said of his 20-minute long interview Thursday with the Calgary Herald.

The Calgary mayor responded to Kenney’s comments yesterday, tweeting, “People like me, eh?” This tweet sparked a Twitter hashtag that went viral called #peoplelikeNenshi, even prompting a tweet from Liberal leader Justin Trudeau who tweeted “Canada is lucky to have #peoplelikeNenshi who stand up to the politics of fear & division.”

The public battle between Kenney and Nenshi started earlier this week after Nenshi appeared on “Everything is Political” and called Stephen Harper’s policy on the niqab dangerous, dog whistle politics.

“This is unbelievably dangerous stuff,” Nenshi said. “I spoke with a group of mayors and councillors from all over Alberta last week, and in my speech with all of these people from small town Alberta, I stood up and said this is disgusting and it is time for us to say stop it — to say this is enough,” he said.

Kenney stands by his comments and dismisses Nenshi and his other critics as politically correct liberals that implicitly support the oppression of women.

“Those who are arguing for allowing face covering, people to obscure their faces while taking the citizenship oath, are I think unintentionally legitimizing this symbol of the oppression of women,” Kenney said. “This misogynistic symbol that is rooted in the tribal culture,” he said.

The niqab issue is proving to be popular in Quebec and pollsters have suggested it has given the Conservatives a campaign boost.

An Ipsos poll found in early 2015 that 88 per cent of Canadians supported a government directive that face coverings, such as niqabs or burqas worn by some observant Muslim women, were not permitted during Canadian citizenship ceremonies.

Thomas Mulcair and Justin Trudeau have said the policy is divisive, and both would allow women to wear the niqab at citizenship ceremonies. The Conservative government is challenging the ruling of the Federal Court of Appeal. Kenney is adamant it is the government’s right to challenge the ruling.

Kenney also weighed in on another contentious issue, Bill C-24, which allows the government to revoke citizenship from people who commit acts of terror. Critics say this bill creates two classes of citizens — but Kenney argues there is precedent to do it and he says it will continue.

“If you hate our country so much that you joined a terrorist organization that is targeting Canada or Canadians, you take up arms against our country to some form of violent treason, you are repudiating, you are forfeiting, you are renouncing your Canadian citizenship through your own actions,” Kenney said.

Kenney also said that the government will revoke the citizenship of a man born and raised in Canada, Saad Gaya. Gaya, a convicted bomb plotter in the Toronto 18 case, is currently in jail. But Kenney argues he has forfeited his citizenship.

When Solomon asked if there is any precedent for this, Kenney cited that between 1946 and 1977 the original Canadian Citizenship Act stated that joining a foreign army that was in hostility against Canada was grounds for citizenship renunciation. Charges of treason led to execution so governments never got around to revoking citizenship in those cases.

But Kenney also said the government will not widen the criteria to strip citizenship of people who have committed other crimes and that doing so is not suggested in Bill C-24.

“It does not include serial murders or any kinds of criminality,” Kenney said. He said only “violent acts of disloyalty to Canada” would justify revoking citizenship.