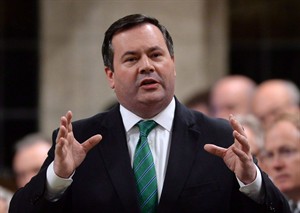 Minister of Employment Jason Kenney is shown responding to a question during question period in the House of Commons on Parliament Hill in Ottawa on Tuesday, November 18, 2014. THE CANADIAN PRESS/Sean Kilpatrick

OTTAWA - Federal officials are investigating an apparent privacy breach involving an imprisoned terrorist who was stripped of his citizenship.

Zakaria Amara's receipt of a government letter informing him he no longer held Canadian citizenship was promptly reported in the media late last month and soon after confirmed by a Conservative cabinet minister in the middle of a closely fought election campaign.

The issue quickly reignited campaign trail debate about new provisions that allow the government to revoke a terrorist's Canadian citizenship as long as the person has nationality elsewhere.

However, Citizenship and Immigration Canada is refusing to release a copy of the letter to Amara "due to privacy considerations," said department spokesman Remi Lariviere.

As for the public disclosure of the revocation, Lariviere said the department "takes privacy matters seriously and has procedures in place to protect personal information."

"Within the department, we will be looking into the matter according to normal procedures."

Citizenship and Immigration would not elaborate, saying, "It would be inappropriate to comment any further."

The federal Privacy Act protects the privacy of individuals with respect to personal information about themselves held by government institutions.

Personal information may be released when the head of a government institution decides the public interest in disclosure clearly outweighs any invasion of privacy that could result. In such cases, section 8(5) of the Privacy Act stipulates that the institution head must notify the privacy commissioner in writing "prior to the disclosure where practicable" or soon afterward.

The privacy commissioner, in turn, may notify the affected individual their personal information is being disclosed.

"Our office does not appear to have received a public interest disclosure notification under subsection 8(5) related to this issue," Lawton said.

Amara, born in Jordan, was arrested in 2006 along with several others for allegedly plotting to set off bombs in the Toronto area. He was sentenced in 2010 to life in prison.

According to the National Post, Amara got a notice in June informing him of the government's intention to revoke his citizenship. On Sept. 25, he received a letter confirming the move at the Quebec penitentiary where he is serving his sentence, the newspaper said.

On Sept. 26, Defence Minister Jason Kenney tweeted that Amara so despised Canada he "forfeited his own citizenship" by scheming to murder civilians.

Kenney said in an interview with The Canadian Press the same day that Amara deserved to lose his citizenship for being guilty of "violent disloyalty to Canada."

Several other convicted terrorists — including at least one born in Canada — have received notices informing them of the government's plan to pull their citizenship.

The British Columbia Civil Liberties Association, the Canadian Association of Refugee Lawyers and Asad Ansari, who was convicted along with Amara in the 2006 plot, have launched a constitutional challenge of the new provisions.

They argue that the revocation law, among other things, violates the principle that a person cannot be punished twice for the same offence.

The NDP and Liberals say they would scrap the new measures.