NDP take heart in defeating Harper Conservatives despite their own losses 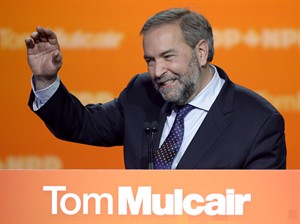 MONTREAL - The so-called "orange wave" created in Quebec and elsewhere in Canada by former NDP Leader Jack Layton went down the drain Monday night, taking much of the left-leaning party's political strength with it.

A visibly deflated Tom Mulcair, who prevailed in a long, difficult fight for his own riding of Outremont, delivered a subdued but gracious concession speech to a few hundred supporters at Montreal's Palais de Congres.

"With this election, Canadians have asked us all to work for them. We will not let them down," the NDP leader said, hinting that the party will, at least during a majority Liberal government, resume its role as the conscience of Parliament.

"We will be unwavering in our pursuit of better health care for Canadians. We will stand strong in our fight against climate change and to protect our land, air and water. We will be resolute in our efforts to build a true nation-to-nation relationship with First Nations, Inuit and Metis peoples.

"It's on these priorities and many more that New Democrats will make real and lasting progress."

The party, which had taken such pride in being elevated to Official Opposition status four years ago, saw its seat count reduced to 44 from 95 with just under 20 per cent of the popular vote.

Although disappointing, it returns New Democrats to the more traditional levels of support they saw after the 2011 campaign, when they captured 30.9 per cent of the popular vote.

How much of that implosion was due to the perception that the party had veered too far right and away from its traditional base is up for debate, although at the party's last rally in Toronto, left-leaning supporters were handing out pamphlets and magazines to remind New Democrats who made up their constituency.

Party insiders said that despite the devastating collapse of the party's base of support, Mulcair intends to stay on as leader.

The NDP will need all of the help it can get.

Justin Trudeau's Liberal tide swept away a number of the party's experienced, articulate, incumbent MPs, some of whom have served in the House of Commons since 1997.

If there was an upside, it is that the Conservatives are no longer in power, said Karl Belanger, a senior NDP strategist.

"The first objective the NDP campaign set — the No. 1 priority — was to defeat Stephen Harper," said Belanger.

"Sounds like Canadians made that choice tonight. The Conservative government is gone, so now we can start to fix the damage Mr. Harper has created."

The party entered the 78-day campaign riding high in the polls, but saw its lead evaporate halfway through, forcing it to spend the rest of the writ period trying to regain the upper hand.

The momentum shifted for the NDP in mid-September, when the Conservatives chose to use the issue of women wearing the niqab at citizenship ceremonies as a wedge issue.

Mulcair was forced to oppose it, a position unpopular among voters in the party's base of power in Quebec.

It not only blew up the NDP campaign, but it wrecked the Conservatives' as well, Belanger said.

"The Conservatives decided to blow up our campaign with the niqab. So they used that weapon and in the process they blew up their own campaign, so they have only themselves to blame."

Belanger said the NDP's stand on the niqab was not unlike the one the NDP took against the Conservative anti-terror bill, Bill C-51, which he says was initially accepted by the public before the details became widely understood.

The party placed a lot of emphasis on building a political machine during their time as Official Opposition — a fundraising and organizational structure that will survive the dramatic collapse.

"We hoped this investment would bring good results," said Belanger. "This kind of operation takes a lot of time and resources to build, but once it's built you can rely on this election and the next election."