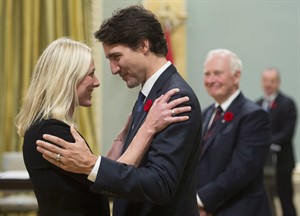 OTTAWA - "Visitors in the Commons gallery couldn't help seeing one woman among so many men," the late cabinet minister Judy LaMarsh lamented in 1969.

"But they made no effort to disguise the fact that they regarded me as a curiosity and stared whenever I could be seen."

Fifteen women from different walks of life took positions Wednesday in the first gender-balanced cabinet in Canadian history, taking on portfolios that will include priority policy files for the new government. The cabinet has 31 members, including Trudeau.

The new prime minister was asked why gender parity was such a priority for him. "Because it's 2015," he replied, sending up a cheer from the crowd gathered outside of Rideau Hall.

Jody Wilson-Raybould, a lawyer and former regional chief of the B.C. Assembly of First Nations, was sworn in as attorney general and justice minister, becoming the first indigenous person to hold the post.

She follows in the footsteps of Tory Kim Campbell and Liberal Anne McLellan. Wilson-Raybould will have to tackle the legalization of marijuana, how to approach physician-assisted death, and the retooling of anti-terror legislation introduced by the Conservatives.

McKenna's win over popular NDP MP Paul Dewar in downtown Ottawa was one of the most stunning local victories of the 2015 election.

Former journalist and media manager Chrystia Freeland is the trade minister, the first woman in the job since Pat Carney held the post in Brian Mulroney's government in the 1980s. Freeland will have the finalization of the Trans-Pacific Partnership on her plate.

Other women in cabinet include longtime MP Carolyn Bennett as minister of indigenous and northern affairs and former Manitoba politician and geoscientist MaryAnn Mihychuk as employment, workforce development and labour minister.

Trudeau's commitment to gender parity sparked a debate on Canadian newspages about whether the move was appropriate — should the goal not be to appoint based on merit?

McLellan, who held a number of portfolios in Jean Chretien's government including justice and public safety, said Trudeau had an "embarassment of riches" when it came to choosing 15 qualified women from the group of 50 MPs elected.

"I'm very pleased today to see that Prime Minister Trudeau has put women into some extremely important heavy-duty portfolios, and that is great to see," McLellan said.

"I think it speaks to the normalization of women in public life, coming into politics from every possible background and experience, and they can step up and do any job in government."

Trudeau's commitment to gender parity appears to have fizzled, however, when it comes to cabinet committees, the bodies that help plan the government's policy direction.

The new "agenda and results" committee, chaired by Trudeau himself, features only four women out of 11 ministers. The Treasury Board committee has only three out of 11.

The overall swearing-in ceremony highlighted the roles of several other key women, including Clerk of the Privy Council Janice Charette, a Harper appointee.

Trudeau's incoming chief of staff, Katie Telford, was cheered by Liberal activists as she walked up the drive to Rideau Hall before the swearing-in. She is only the second woman to hold that job.

Former governors general Michaelle Jean and Adrienne Clarkson were given prominent seats at the event.

Two young Inuit girls won over the gathering inside Rideau Hall's main ballroom with a throat-singing performance that ended in joyful giggles.

LaMarsh, who held three cabinet posts in the government of Lester Pearson, said that other qualified women at the time weren't even considered for cabinet because she had taken the spot.

"It simply never occurred to Pearson that there could be more than one woman in the cabinet," she once wrote in a newspaper article.

"He looked at the nominee and only secondly at ability."