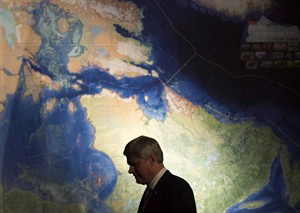 Prime Minister Stephen Harper is silhouetted against a map of Northern Canada during an event at the Royal Ontario Museum, in Toronto, on March 4, 2015. In the wake of their election loss, members of the Conservative Party will pick an interim replacement today for former leader Stephen Harper - a decision that could, at least temporarily, mark a shift to how the party operates. THE CANADIAN PRESS/Darren Calabrese

OTTAWA - Alberta MP Rona Ambrose stepped into Stephen Harper's leadership shoes Thursday — albeit on an interim basis — as the Conservatives gathered for the first time since last month's election demoted them to the official Opposition.

Ambrose, who served as health minister in the last Parliament, had campaigned on a promise to bring a respectful and civil tone to debate in the House of Commons.

"I'm excited that we are going to be moving forward with a strong opposition with confidence and optimism," she said, flanked by fellow Conservative caucus members chanting her name in support.

"I am extremely proud to be the new leader of the Opposition."

Ambrose, 46, was first elected to the House of Commons in 2004 and went on to serve in several cabinet posts under Harper.

Harper addressed the start of the meeting Thursday, speaking for about 10 minutes and expressing regret at the party's loss but also talking hopefully about its future. He then left for the remainder of the discussion.

The mood in the room was civil and positive throughout, several current and former MPs said, with Harper receiving several standing ovations.

"Everybody credits Stephen Harper with having given our country tremendous leadership through difficult times in the past decade and people are very proud to have served with him and to have campaigned with him," said Peter Van Loan, the former government House leader.

"And I think he is going to go down in Canadian political history as one of our best prime ministers ever."

Harper, who will continue to serve as an MP for the riding of Calgary Heritage, was set to return to his hometown of Calgary, Alta., on Thursday night and is expected to largely take a back seat in his caucus going forward.

There were eight candidates in total vying to replace him. The job comes with an $80,100 bump in salary, a car and driver and the residence of the official leader of the Opposition — Stornoway.

None spoke to the media after the meeting and while Ambrose was lauded by caucus colleagues for her communication skills, she only took a handful of questions.

One personal challenge she faces is her ability to speak French — while she does speak some, she is not fluent. On Thursday, she deferred to caucus colleague Steven Blaney, although she did attempt to answer one question in French.

But the major political task ahead of Ambrose will be to rebuild the party heading into the eventual formal leadership race, likely still a long way off.

The Conservatives saw their support collapse in last month's election, losing every seat they held in Atlantic Canada, a lone outpost in the north, dozens of ridings in Ontario and even a few in their stronghold of Alberta.

They now have 99 members in their House of Commons caucus and 47 in the Senate; members of the upper chamber were given the chance to vote on leadership.

Ambrose said she's confident the party can enter a new era with a new tone and a new attitude, with their sights set on the next election in 2019.

"My colleagues chose me and they put their trust in me," she said. "We feel very optimistic about our chances in the next election."

Ambrose's cabinet career beginning with a controversial stint in Environment, where she was in charge of overhauling the Conservative government's approach to that file, starting with an announcement Canada wouldn't be meeting its emissions reductions targets under the Kyoto Protocol.

She also served as minister for the status of women, where she was criticized for voting in a favour of a motion that would have seen the House of Commons study the question of when a fetus becomes a person — a motion interpreted by pro-choice activists as a means for the party to re-open the abortion debate.

She has also been active in the promotion of women in leadership positions, and in that portfolio struck a committee to examine how to get more women involved in the highest echelons of the corporate sector.