“Thanks Peter, Chantal, Andrew and viewers” 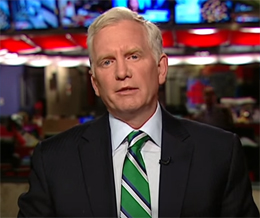 For the last few years, it’s been my good fortune to sit down most Thursday nights and talk politics with some very thoughtful people. The At Issue Panel on CBC’s The National has long been a well regarded hot stove session for many people who love politics.

It was an honour to be asked to step into the shoes of Allan Gregg (a close friend who mentored me when I started my career in polling). I mostly hoped not to embarrass him, my family and friends.

After a little while, and owing in large part to the kindness and encouraging words of Chantal Hebert, Andrew Coyne and Peter Mansbridge the nerves went and it became a 15-minute part of my week that I began to look forward to.

It’s for others to judge whether what I said added value to the conversation; from my vantage point it’s been a pleasure to work with the committed journalists and talented producers that make the National a superb news broadcast.

Various of my family members have always been interested in politics, and several have worked for political leaders and parties, myself included. I’m delighted that both my daughters have a respect for politics that rivals the feeling that their mother and I have had over our lives.

My wife was Joe Clark’s Legislative Assistant when he was Prime Minister, and served as a senior policy advisor to Ontario Premier Bill Davis, as well as Federal Ministers Mike Wilson and Lowell Murray.

My brother and business partner Rick has been a prominent Reformer and Conservative over many years, having started life in politics as a Liberal, in the 1960’s. He was an advisor to Stephen Harper in the campaign just ended.

For my part, I have helped Progressive Conservative and Liberal politicians in the past, but have not participated in partisan politics for years.

Instead, I’ve focused on writing, polling, and trying to do a fair job at commenting on what’s going on in our national political life. I’m sure I get it wrong sometimes, and no doubt personal opinions creep into my analysis from time to time. My goal has been to offer a slightly different perspective than that which a journalist brings, and to try to do it in a fair minded way.

This week, my eldest daughter became the Director of Communications to the new Prime Minister. As any parent would be, I’m proud of her passion and hard work.

When Mr. Trudeau was the leader of the third party, I felt that the risk of a real or perceived conflict was limited, and manageable. But I do feel that with the election results on October 19th, the risk is different.

The conversation during the At Issue panel is regularly a discussion of how the government of the day is doing, including its communications effectiveness.

Even if I felt I could be completely dispassionate, fair minded viewers might reasonably have doubts.

On election night, after the results were clear, I mentioned to my fellow panelists that I would feel the appropriate thing to do is to step away from the panel, if my daughter was offered and accepted a position in the new Prime Minister’s Office.

I have great respect for the work of the CBC and nothing but the highest regard for Peter and Chantal and Andrew. I hope I contributed to making the At Issue panel enjoyable and informative, and I know it will continue to set a high standard for political analysis.

I’ll continue to write and comment in other ways in the future, but want to thank the CBC and the many people who’ve stopped me in hallways and airports and street corners to say they appreciate the work of the At Issue panel and CBC’s The National.

At Issue – a look back

At Issue | Challenges ahead for Trudeau

Election Day One | At Issue

Who’s Really on Trial: Duffy or the Senate? | At Issue

At Issue: Your Questions

At Issue: The Robocall “Scandal”

At Issue: The Senate Scandal