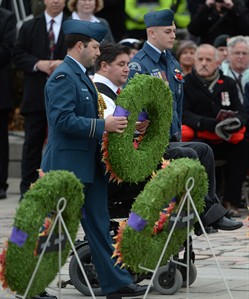 Minister of Veterans Affairs and Associate Minister of National Defence Minister Kent Hehr (centre) places a wreath during the Remembrance Day ceremony at the National War Memorial in Ottawa on Wednesday, November 11, 2015. THE CANADIAN PRESS/Sean Kilpatrick

OTTAWA - Lest we forget, politicking evidently never stops, even on Remembrance Day.

The Liberal party, flush from the Oct. 19 election victory, used the solemn occasion Wednesday to continue trying to accumulate information on potential supporters and donors.

The governing party issued an email from new Veterans Affairs Minister Kent Hehr, which encouraged readers to add their names to an online message of thanks to members of the Armed Forces and veterans "for their service and sacrifice."

Such email solicitations, known as data mining, are commonly employed by political parties to glean names, email addresses and postal codes which are added to data banks used to identify supporters and financial contributors.

NDP veterans affairs critic Irene Mathyssen was dumbfounded that the Liberals would use veterans for partisan ends.

"To utilize this emotional day in such a cynical way makes me very sad," she said in an interview.

"It is something that is, I think, beneath the dignity of any government ... (Veterans) are individuals and they matter. Their health and what happens to them matters and to conduct a mining expedition, I'm speechless, I'm very, very distressed by that."

However, a Liberal party spokesman said Hehr's message was "non-partisan" and was posted on various online platforms, as well as emailed to people already on the party's mailing list.

"The objective was not to be partisan but to make sure that the largest number of Canadians could see the minister's message and be engaged in the discussion," said Olivier Duchesneau.

Hehr posted the same message on his Facebook page but it did not include the data-mining device of asking readers to add their names to a note of thanks to veterans.

The message itself veered into the political realm, reiterating various Liberal campaign promises aimed at honouring the country's "sacred obligation" to veterans.

Hehr said he's excited to be the minister who will be "rolling out all of the commitments we made during the campaign in the weeks and months to come."

But his message was also personal; Hehr recounted how a drive-by shooting left him a quadriplegic at 21, and noted that, while such moments of life-changing, extreme violence are rare in civilian life, they can be an "everyday risk" for members of the military.

"When I was injured, I found the support I needed to rebuild my life and eventually go on to have a successful career in public life," said Hehr, a former Alberta MLA.

"In those moments I felt alone, there was always someone, somewhere I could turn to. I want Canada's servicemen and women and Canada's veterans to know they too are not alone, that all Canadians stand with them."