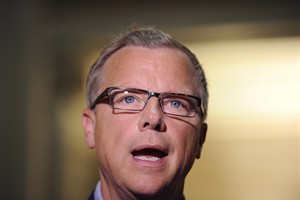 Saskatchewan Premier Brad Wall speaks at the Saskatchewan Legislative Building in Regina, Sask., Friday, July 24, 2015. Wall wants the federal government to suspend its plan to bring in 25,000 Syrian refugees by the end of the year. THE CANADIAN PRESS/Mark Taylor

REGINA - Saskatchewan Premier Brad Wall is citing safety concerns for his wanting the federal government to suspend its plan to bring in 25,000 Syrian refugees by year's end.

Wall says in a letter to Prime Minister Justin Trudeau that he is worried that fast-tracking refugee claims could undermine the screening process.

"I do believe that if there's a chance that even only one person would use the refugee process to come into this country with a plan to do ill, to do bad things in Canada to Canadians, that's worth it, that's worth some circumspection," Wall said Monday at the Regina legislature.

The premier said in his letter that the attacks in Paris are a grim reminder of the death and destruction even a small number of "malevolent individuals can inflict upon a peaceful country and its citizens."

Gunmen and suicide bombers killed 129 people and injured about 300 in the French capital on Friday night.

Wall would like the government to re-evaluate its goal and what's being put in place to achieve it.

The premier said Canada should take in refugees, but security should be "first and foremost" the concern for the provincial and federal governments.

Wall said Trudeau's desire to help refugees that pose no threat to anyone is noble and he realizes the refugee plan was promised by the Liberals in the federal election.

But he said he believes Canadians will understand if it is put on hold in the interests of security.

Trudeau told his fellow G20 leaders meeting in Turkey on the weekend that Canada will continue to make a strong military contribution in the fight against Islamic militants — but it won't be from the air.

Trudeau made an election commitment to withdraw Canada's six CF-18 fighter jets from the U.S.-led coalition attacking targets in Iraq and Syria.

Several U.S. governors are threatening to halt efforts to allow Syrian refugees into their states in the aftermath of the terrorist attacks in Paris, and at least one is asking the White House for more information on plans to allow refugees into the country.

The governors are responding to heightened concerns that terrorists might use the refugee process as cover to sneak across borders.

One of the attackers in Paris had a Syrian passport, and the Paris prosecutors' office says fingerprints from the attacker match those of someone who passed through Greece in October.