Canada to beef training of Iraqi forces, but experts ask: How far will it go? 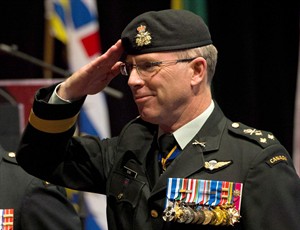 Lt.-Gen. Stuart Beare is shown in this file photo in Ottawa on Friday, October 5, 2012. A former overseas commander says if Justin Trudeau's beefed-up training mission in Iraq is to succeed in a timely manner he'll have to consider allowing Canadian troops to accompany local forces on operations in limited circumstances. THE CANADIAN PRESS/Sean Kilpatrick

OTTAWA - During the Afghan war, they called it advise, assist and accompany.

The Harper government took out the word "accompany" when it sent special forces into northern Iraq in the fall of 2014, but quietly took the political and military risk of allowing those highly trained troops to visit the front and even guide in airstrikes for Kurdish forces.

Now that Prime Minister Justin Trudeau has committed to a more robust training mission in Iraq, a former overseas commander says allowing troops to accompany local forces on operations in limited circumstances is a policy discussion that will have to happen — not only in Ottawa but in other western capitals.

"It is an important policy decision," said retired lieutenant-general Stuart Beare, who also served as the deputy commander of NATO's Afghan police training mission. "There is clearly a qualitative distinction in the value of the contribution — and the results you achieve — between preparing them in garrison and sending them forward and preparing them in garrison and escorting them forward, with open eyes and a balanced sense of risk and security."

There are also some functions, such as calling in air strikes, that locals are not capable of doing in the medium term.

"The peshmerga are not going to create an air force, so there's huge merit having those functions provided," said Beare, who is now a fellow at the Canadian Global Affairs Institute.

Canadian CF-18 warplanes will be withdrawn from combat before March and replaced by a more-robust ground training mission, although many of the details are still being worked out, Trudeau told reporters on Monday.

Both before and during the election, Trudeau made clear he would not commit regular army combat forces to Iraq, but "would engage Canada's military in something we've demonstrated tremendous ability at in Afghanistan and elsewhere: training up local troops doing the fighting on the ground."

But in Afghanistan — at least in the initial stages — that involved accompanying troops into the field and mentoring them under fire. It was only after 2011 withdrawal from Kandahar that Canadian engaged in more behind-the-wire training and institution-building.

In this new mission, the Liberals will have to navigate around the perception that they are trading one form of combat for another. A debate erupted in the wake of the death of special forces Sgt. Andrew Doiron last March about whether the limited activities of special forces constituted combat.

The White House has recently struggled with the similar distinction following the death of one of its special forces soldiers last month during a hostage-rescue mission near the northern town of Hawija.

Beare says accompaniment is risky and should only be undertaken under strict conditions.

"We would not surrender our own sense of security and protection to a (local commander's) whim," he said.

Washington has begun to recognize the necessity of a limited involvement with a recent acknowledgment that U.S. special forces will carry out select operations against the Islamic State in Syria.

The death of Doiron was, at the time, a dramatic demonstration of how much basic training Kurdish peshmerga fighters needed. An investigation found that even rudimentary signals and passwords among observation posts were not followed. Those same local forces were without radios and other hardware.

Beare says it would be advisable for Canada to concentrate its training efforts with the Kurds and leave the complicated — and potentially messy — job of instructing Iraqis, who are riven with sectarian hostility, to the U.S. and other allies.

The Canadian training could involve everything from basic combat skills through headquarters staff planning up to defence department logistics and recruiting.

The political pressure to demonstrate that Canada is still in the fight increased following the massacres in Paris on Friday.

Jeremy Shapiro, a foreign policy expert at the Brookings Institute, said the purpose of terrorism is to provoke a response and the Islamic State is hoping the west will answer with more violence, fear and division.

He said he understands the visceral reaction to the carnage and that measured responses to outrages are rare, but people need to understand that restraint and treating terrorism as a crime is the way to deal with it over the long term.

The air campaign has been effective in halting the Islamic State's advance, but has done nothing to address the issues that created the conflict.

"It's pretty hard to bomb a country into liking you," said Shapiro in an interview from Washington.