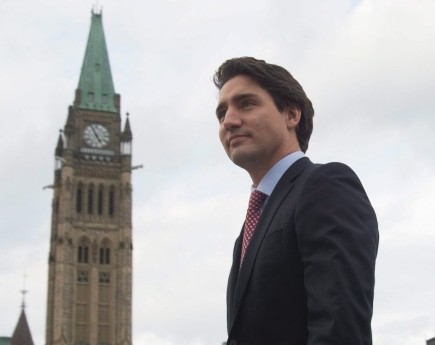 Prime Minister Justin Trudeau and the country’s premiers will take the first steps Monday toward reversing Canada’s reputation as an environmental laggard in the international fight against climate change.

A gathering of first ministers — the first such meeting in nearly seven years — is not expected to produce new national targets for reducing greenhouse gas emissions or any new concrete measures for achieving them.

It is designed more as a demonstration of the fledgling Liberal government’s good intentions as Trudeau prepares for next week’s United Nations summit on climate change, known as COP21, in Paris.

Trudeau wants to signal to the international community that Canada is finally taking the climate change challenge seriously — a task made much easier Sunday when Alberta Premier Rachel Notley unveiled plans to impose a carbon tax, phase out coal-fired power plants and cap emissions from the province’s controversial oil sands, the largest emitter in the country.

Indeed, Monday’s meeting has been deliberately timed to give Notley a national stage from which to tout her plan and to receive hosannas from fellow first ministers across the country.

At the same time, Trudeau wants to signal to Canadians that his government intends to live up to his promises to develop policy based on scientific evidence, not politics, and work collaboratively with the provinces and territories.

All those good intentions might not exactly be paving a road to hell but the devil will certainly be in the details that will follow after Paris, when Trudeau will have to mediate conflicting