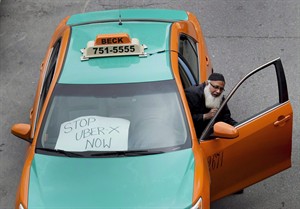 A taxi driver protests Uber in Toronto on June 1, 2015. The Competition Bureau says local regulations on the taxi industry need to be overhauled to deal with new competition from alternatives like the ride-hailing service Uber. New competitors have gained market share by undercutting the fixed prices of existing cabs and skirting regulations for the industry. THE CANADIAN PRESS/Nathan Denette

In a report released Thursday, competition commissioner John Pecman said local and provincial governments should remove restrictions on the number of taxi licences they grant to drivers, allow people anywhere to hail rides from the curb and offer surge pricing, which Uber now uses to charge more at times when there is greater demand.

The bureau says that has created an uneven playing field, and that cities and provinces should balance the scales by easing rules on taxis rather than looking to increase regulations.

Kristine Hubbard, operations manager of Toronto-based Beck Taxi, said governments shouldn't throw out all of the existing regulations because of one company.

"If regulation is what we're talking about in the future, whether relaxed or not, if the city isn't capable of enforcing its own regulations then we have bigger problems than what is outlined in this report," she said.

Hubbard said Beck is open to new ideas, such as demand-based payment models. She said that no matter what the new rules were, Beck Taxi and Uber should be treated the same.

"The level playing field is something that's a requirement," she said.

Last month, Toronto Mayor John Tory said that while Uber is operating outside legislation, it would be impractical to devote the police and bylaw attention necessary to shut it down entirely.

Still, Toronto has joined other cities including Ottawa in issuing fines against Uber drivers. Montreal has done the same and in some cases gone further, seizing vehicles.

In Calgary, Uber has suspended its service after a judge approved a temporary injunction against it last week.

Cities control taxi licensing and the number of taxi permits, and in some areas the value of a so-called taxi plate has reached six digits.

The Competition Bureau report found that the cost of a single taxi plate in Toronto in 2012 was as high as $360,000.

The bureau also recommended that, among other changes, regulators let additional qualified drivers work for hire and provide incentives for drivers to operate accessible vehicles in areas where consumers are underserved.

City of Toronto spokesman Mark Sraga said in an email that the city will include the Competition Bureau's report in its ongoing review of its taxi and transportation policies, which is expected to produce an initial report in the spring.