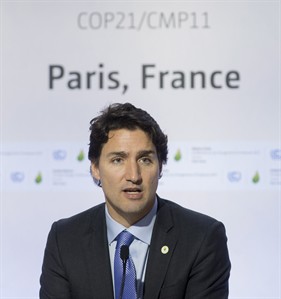 The Liberal government plugged a couple of its election campaign promises on the environment into some high-wattage personalities Monday on the opening day of an international climate change conference.

Microsoft co-founder Bill Gates staged an event at the Paris COP21 venue for Mission Innovation, a group of 19 countries and 28 leading investors that are pledging billions to boost new developments in clean technology.

Gates announced that private investors are committing $7 billion for research and development of clean energy, while the White House put out a release saying it would double its annual $5 billion-plus for clean tech innovation.

"It lines up very well with what President Obama and others are calling for in Mission Innovation," Trudeau said at a news conference just prior to the splashy Mission Innovation launch. "So we're very pleased to be part of this international initiative."

Governments from India, South Korea and Saudi Arabia to Australia and Norway are involved in the movement, which hopes to harness public and private dollars to boost investment.

The money will support a wide range of technologies, Gates said Monday — "biofuels, carbon capture, high wind, fission, fusion — we're unbiased, but it has to be clean and possible to scale up cheaply."

Saskatchewan Premier Brad Wall, who is one of five Canadian premiers in Paris for the conference opening, arrived with the stated aim of promoting carbon capture and storage technology that is being pioneered in his province.

A new coal plant goes up every 13 days in China, Wall said Monday and India has 500 new, coal-fired generating stations in the works.

"If we're serious about climate change, doing something about greenhouse gases, Canada can actually have a big vision of contributing technology that will help clean up the transition energies like coal," said Wall.

Saskatchewan's Boundary Dam power plant near Estevan opened a carbon- capture system last year amidst great fanfare, but the project has been beset with cost overruns and technical problems.

Wall said all new technologies come down in price and improve in performance over subsequent generations. He hopes Canada can be an exporter of carbon capture to the world, calling it "one arrow in the quiver" for fighting climate change.

It would also be good for the Canadian economy to become a clean technology exporter.

That's part of the green revolution equation that is frequently overlooked — the opportunity for visionary investors to get very wealthy by betting on the cutting edge.

Green party Leader Elizabeth May is a big promoter of clean tech but sounded less than sold Monday when asked about carbon capture and storage.

"It's potentially a small part of the solution," said May, a Canadian delegate to the COP21 climate conference.

"But the reality of carbon capture and storage is it allows the notion that you can have your cake and eat it too."

May argues that the focus of clean technology innovation should be getting away from fossil fuels, especially coal, as quickly as possible.