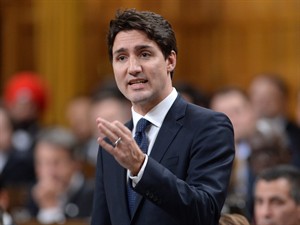 Prime Minister Justin Trudeau answers a question during Question Period in the House of Commons in Ottawa, on Monday, Dec. 7, 2015. THE CANADIAN PRESS/Sean Kilpatrick

Jens Stoltenberg's approach, made on the sidelines of last week's foreign minister's meeting in Brussels, could be helpful to the Liberal government, which began its first question period fending off accusations that it is cutting and running from the war against the Islamic State of Iraq and the Levant, also known as ISIL or ISIS.

The secretary general's conversation with Dion was not a formal request, but defence and diplomatic sources say it was meant to sound out the Trudeau government's potential interest in the defence capacity-building program, which was announced last summer.

"We discussed with the secretary general the defence capacity building programs across the board," said one official who was not authorized to discuss the matter publicly and so spoke on condition of anonymity.

Canada contributed to the previous training mission in Iraq, which was shut down in 2011 when the U.S. withdrew its forces, the official added.

NATO gave no timelines for the training, which is to take place at secure bases in Turkey and Jordan, and would include a wide series of measures, such as countering improvised explosive devices, bomb disposal, de-mining, civil-military planning, cyberdefence, military medicine and medical assistance.

An alliance official who also spoke on background said the mission is still in the planning stages and member nations have yet to be asked for troop contributions.

Dion said Wednesday that the government's plan to withdraw CF-18 jetfighters from the bombing campaign will unfold "within weeks, not months," but first details of a beefed up training mission will have to be negotiated with allies.

"We want to do it at the same when we come (forward) with a new plan," Dion said. "To do it before we have the new plan you would have a kind of vacuum that we want to avoid. Our allies understand that."

He said the government wants to consult with allies about where the contribution would be helpful. Last week, the Italians expressed interest in partnering with Canada to conduct police training in northern Iraq.

Defence Minister Harjit Sajjan was more circumspect on the details, saying they are "considering all options right now in terms of our contribution to the fight against ISIL."

He underlined there are a number of different ways a military contribution could unfold and pointed specifically to intelligence gathering, which is something the air force's CP-140 Aurora surveillance planes have been doing in Iraq.

The newly refurbished planes have been helping spot ISIL targets on the ground and doing damage assessments for coalition commanders once the bombs have fallen.

Interim Conservative leader Rona Ambrose said the extremists who have overrun vast swaths of Syria and Iraq are part of a death cult that sells women and children into sexual slavery and murders religious minorities.

"And yet the prime minister says he's going to take our CF-18s out of the fight; just how bad does it have to be in Iraq and Syria for him to leave our CF-18s there?" said Ambrose, who pointed out that other allies — notably Britain and France — were stepping up their bombing missions.

Canadians spoke during the election campaign and they want to see the mission refocused towards more long-lasting results, such as training security forces, Trudeau responded.

"There is not a Canadian in this country who does not think that ISIS is a group of terrible terrorists who should be stopped," he said.

"The question has always been how best to engage, and how can Canada use its strengths and the extraordinary strengths of men and women in the Canadian Forces to support in the fight against ISIS? Ongoing right now, there continue to be airstrikes. We have committed to end those airstrikes and to transform our engagement in a different way, equally militarily, to ensure that Canada continues to be a strong member of the coalition fighting against ISIS."