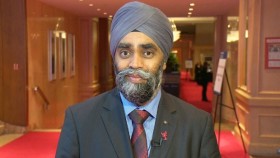 Canada will not pull its CF-18 fighter jets from the combat mission in Iraq and Syria if it degrades the overall capability of the coalition forces, Defence Minister Harjit Sajjan told SiriusXM in an interview on “Everything in Political with Evan Solomon.”

“The decision for that will be based on my conversations with my counterparts, making sure that the coalition’s capability is not reduced,” the defence minister said. He said he is working on various options and will announce a decision soon.

This stands in contrast to what the Foreign Affairs Minister Stéphane Dion said on Monday, when he announced that the combat mission would end imminently.

“It will be a matter of weeks not months,” Dion told reporters. Dion also said pulling out Canada’s jets would be done in conjunction with Canada’s allies and rolled out alongside a new plan, but he never hinted that the defining issue would be “capability.”

Sajjan also said he is considering leaving Canada’s air refueling and reconnaissance aircraft as part of the mission.

The Conservative defence critic James Bezan responded to Sajjan, demanding to see the details of the Liberal plan for the military mission. He believes there have been contradictory messages sent about the nature of the mission and whether the Liberal government will eventually put more boots on the ground.

“I’m looking forward to seeing exactly what the plan is because that wasn’t apparent,” says Bezan. “The defence minister is using language that’s quite different from what we’re hearing from the Prime Minister,” he said.

Bezan said the Prime Minister has said in the House that Canada needs to fight ISIS in its own territory. “Does that mean boots on the ground?” he asked.

“We are trying to, hopefully, not even be able to use military bases, but if it’s needed, we are available for that purpose,” the minister said.

Today the threat level from ISIS was raised in Geneva after suspects related to the Paris attacks are being tracked by police, but the defence minister maintains his previous statement that Canada has nothing to fear from ISIS.

“Canada should not fear ISIS, and I am firm believer in that,” he said. “Canadians should feel safe but that does not mean that we are going to eliminate all threats, but we have security forces that 24/7 are looking out for these types of threats,” he said.

Sajjan also said his most important job is protecting the mental health of the men and women in the Canadian military.