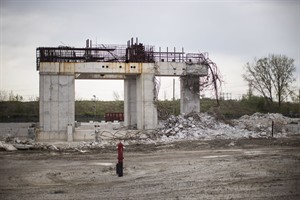 A general view taken on Sunday, May 18, 2014 of remains of the 800-megawatt gas-fired power plant in Mississauga which had it's construction canceled by the then-Liberal Government of Ontario, prior to the provincial general election of 2011. Ontario Provincial Police have laid criminal charges against two aides to former premier Dalton McGuinty in connection with the deletion of documents related to two cancelled gas plants. THE CANADIAN PRESS/Chris Young

David Livingston, McGuinty's former chief of staff, and Laura Miller, the deputy chief who went on to work for British Columbia Premier Christy Clark, are each charged with breach of trust, mischief in relation to data and misuse of a computer system to commit the offence of mischief.

The charges stem from the destruction of thousands of government emails about the Liberals' decision to cancel planned gas plants in Oakville and Mississauga prior to the 2011 election. The province's auditor found the move will cost ratepayers up to $1.1 billion.

McGuinty's lawyer, Ronald Caza, issued a statement Thursday saying the charges against Livingston and Miller "confirm there was no wrongdoing on the part of the former premier."

Miller resigned from the executive of the B.C. Liberal Party after the charges were laid.

"In British Columbia, Laura Miller is known to her colleagues as a person of integrity," Clark said in a statement as Liberal party leader. "She has stepped down as executive director to focus on clearing her name."

Miller issued a statement accusing the OPP of having a bias against her because of a complaint she filed with the Ontario Independent Police Review Director.

"Officers involved in a substantiated complaint should not have been allowed to continue investigating," she said, vowing to "vigorously defend" herself against the charges in court.

"Every Canadian expects and deserves impartiality and fairness in police charging decisions," Miller said in the statement. "I do not believe that to be the case here."

Both Livingston and Miller are scheduled to make their first court appearances in Toronto Jan. 27. Livingston's lawyer has also denied his client did anything wrong.

Documents released during the investigation showed Livingston and Miller compiled a list of senior Liberal staffers in the then-premier's office whose computers would be purged. The OPP alleged in court documents that the two spent $10,000 to hire Miller's partner, Peter Faist, a computer expert who was given a special password by Livingston to wipe clean at least 20 hard drives in the premier's office.

The OPP served search warrants at provincial government offices in Toronto during the investigation, seeking the electronic mailbox and its backup tapes for Miller and Livingston, between May 1, 2012 and Feb. 11, 2013 — the day Kathleen Wynne was officially sworn in as premier.

Police said then that Livingston was under investigation for breach of trust, but lawyers for Miller and Faist had said their clients were not the focus of the OPP investigation, so the charges against Miller came as a surprise to many.

It was the Liberals' initial refusal to hand over gas plant documents to the legislature's justice committee that sparked a contempt debate that eventually forced McGuinty to resign as premier under a cloud of scandal in October 2012.

Wynne has apologized repeatedly for the gas plants scandal, which the opposition parties called "an expensive Liberal seat-saver campaign.''

The premier said Thursday that all of the events happened before she came to power, and the OPP made the decision to lay charges independently.

"It was a surprise in terms of the timing," Wynne told The Canadian Press in a year-end interview. "The government co-operated fully with this investigation and will continue to do so."

Last year, Wynne's Liberals shut down legislative committee hearings before Miller and Faist could be called to face questions about the wiping of the hard drives.

The premier defended the decision Thursday, saying the committee had already heard thousands of hours of testimony.

"It was time to write the report," she said. "I think that the information that was necessary was in the public."

The Progressive Conservatives said it was disgraceful that police had to lay charges against senior Liberals for destroying government documents.

"I don't know what Kathleen Wynne can do to restore credibility to the office of the premier now that the OPP has laid charges against top Liberal operatives," said PC Leader Patrick Brown.

The New Democrats said people deserve better from their governments.

"This government has grown increasingly out of touch, preferring to put its own interests ahead of those of Ontarians," said NDP Leader Andrea Horwath.

Both opposition parties pointed out a senior Liberal in Sudbury was charged with offering a job to a former candidate to step aside, and that Wynne's deputy chief of staff, Pat Sorbara, is also being investigated for possible Elections Act violations.

The OPP said it will not comment further on the charges against Livingston and Miller "in order to protect the integrity of the investigation and the ensuing court process."