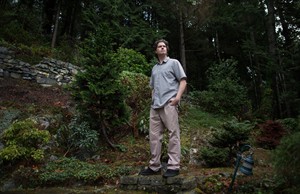 Marcus Richardson stands for a photograph outside his home in Lions Bay, B.C., on Friday December 18, 2015. THE CANADIAN PRESS/Darryl Dyck

VANCOUVER - While Rose Miranda waits for her April court date to face potential charges of possession for the purpose of trafficking, the 65-year-old retired education assistant can't take cannabis for her arthritis.

Mounties have also banned her from visiting or contacting anyone at Phoenix Pain Management Society, the medical marijuana dispensary where she was volunteering when she was arrested in Nanaimo, B.C.

"I love Baby Trudeau, but he says, 'We're going to fix this.' When? Meanwhile, I have clients who don't have their medication," Miranda said.

"I take care of people who are housebound, people in wheelchairs and people who are poor. They need their medication and right now they can't access it."

Prime Minister Justin Trudeau has vowed to legalize and regulate marijuana but no timeline is in sight. Meantime, cannabis-related crimes continue to tie up police and court resources, leaving some feeling like they're in legal limbo.

Miranda began using medical marijuana about two years ago, after she said prescription drugs turned her brain into "mush." She began volunteering at Phoenix, primarily to educate seniors about cannabis as a pain-relief option.

"They came in like a SWAT team, guns out, 'Hands up!,' screaming, yelling, terrifying everybody who was in there," said Miranda.

She said police body-searched everyone, including an elderly volunteer with a cane, before handcuffing them and taking them to jail. There, she said, she sat in a freezing cell wearing only a cotton shirt and pants for more than 10 hours.

Two days later, she said she wound up in hospital with chest pains.

Const. Gary O'Brien of the Nanaimo RCMP said he couldn't comment directly on any dispensaries that were raided, but officers acted professionally at all times.

"I believe most of the scenes were videotaped, so if there's any evidence our police officers were (heavy-handed), that will certainly come out," he said.

O'Brien said there is evidence that some stores were selling to minors but he could not say which ones and the investigations are ongoing.

The RCMP's raids on B.C.'s pot shops are unusual. But across Canada, charges for cannabis possession remain relatively common and have increased over the past decade.

Simon Fraser University criminologist Neil Boyd found in a 2013 study that the Vancouver police rarely recommended charging individuals for cannabis possession as a singular offence, while the RCMP was mostly responsible for a two-fold increase in charges over a decade in B.C.

Boyd said the federal government should consider immediately decriminalizing possession for personal use, while it works out the details of legalization.

"It would send a message that we don't want law enforcement to be particularly focused on possession," he said. "I think it's a very small first step. We have tons of evidence globally that decriminalizing possession has no impact on rates of use or harms."

"Marijuana is still a Schedule 2 controlled substance under the (Controlled Drugs and Substances) Act and we'll be further considering that as we move forward."

Ujjal Dosanjh, a former federal Liberal health minister and B.C. premier, said decriminalizing possession of small amounts for personal use was a good idea, but anything larger would require a regulatory regime.

Dosanjh advocated for legalization in 2012 as part of a coalition called Stop the Violence B.C. While he said he hasn't changed his position, he called on the Liberals to proceed cautiously in light of new data from U.S. states on drug-impaired accidents.

In Washington state where marijuana is legal, the percentage of drivers involved in fatal crashes who tested positive for marijuana doubled over four years to 12 per cent in 2014. Police must use blood tests to determine if a driver recently consumed pot, as there is no approved roadside breath or saliva test.

"If I had that information two years ago, I would have said that we shouldn't legalize and decriminalize until you really have a system where you can check someone on the road," Dosanjh said.

Meanwhile, Miranda is preparing herself for the possibility that she'll face the first criminal charge of her life — she's never even had a parking ticket. She said she hopes she won't have to go to prison to defend the rights of seniors to use medical marijuana.

"I feel very angry, but defiant, because I know I'm doing the right thing. My conscience is clear. I am not a criminal," she said.