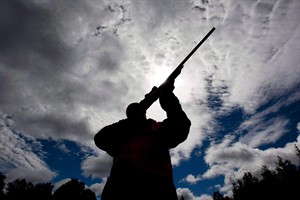 A rifle owner checks the sight of his rifle at a hunting camp property in rural Ontario, west of Ottawa, on Wednesday Sept. 15, 2010. A retroactive Conservative law buried in last spring's omnibus budget bill fundamentally undermines the rule of law and government access-to-information systems across Canada, according to court submissions in a paused constitutional challenge. THE CANADIAN PRESS/Sean Kilpatrick

OTTAWA - A retroactive Conservative law buried in last spring's omnibus budget bill fundamentally undermines the rule of law and government access-to-information systems across Canada, according to court submissions in a paused constitutional challenge.

Twelve of Canada's 13 provincial and territorial information commissioners, as well as the Criminal Lawyers' Association, are seeking intervener status in the case, which challenges the former government's unprecedented rewrite of an old law to get the RCMP and any other government official off the hook for illegally destroying long gun registry records.

The case, brought by federal information commissioner Suzanne Legault on behalf of individual Bill Clennett, is one of the messier legal challenges the new Liberal government will have to mop up in 2016.

The retrospective Conservative changes, backdated all the way to October 2011, served to short-circuit an active investigation by the Ontario Provincial Police into the government-backed actions of the RCMP. Repealing the changes, which became law last June, would presumably put the Mounties back under investigation.

"Should this legislation withstand this challenge, it would have far-reaching implications for criminal law principles," the Criminal Lawyers' Association says in its submission to the Ontario Superior Court of Justice, calling the retroactive legal rewrite ground-breaking.

"State actors obtained the benefit of a retrospective immunization that ordinary citizens have never obtained."

The new Liberal government asked for, and received, a three-month delay in the start of the trial last month as it mulls over its options.

It's been a long legal road.

The federal information commissioner had begun an investigation into a complaint about access to firearms registry records before the government passed the Ending the Long-gun Registry Act in April 2012. The government subsequently assured Legault that it would preserve the records until her investigation was complete, but then pushed the Mounties to quickly destroy the data, in breach of the law. Legault completed her investigation last spring and informed the government of an alleged offence — at which point the Conservatives retroactively rewrote the law, stripped Legault of her jurisdiction over the gun registry records, retrospectively absolved anyone of wrongdoing, and closed down any further investigation.

The former government called the retroactive law a "technical amendment" designed to correct a "bureaucratic loophole" in the original 2012 act.

Provincial and territorial information commissioners say they share "profound concern" over questions of "fundamental importance," including "immunizing public officials from liability and prosecution."

"Legislation retroactively removing the right of access and oversight mechanisms in their entirety, or government action destroying the records, is a particularly egregious infringement," of the constitutionally protected right to access government information, says their joint application for intervener status in the court case.

"Should the constitutional validity of these measures be upheld, the implications for access legislation will be nationwide."

The Centre for Law and Democracy, a Halifax-based advocacy organization, is also seeking intervener status in order to argue that the retroactive changes break binding international law on access to government documents, to which Canada is a party.

But it is the Criminal Lawyers' Association that frames the constitutional challenge in its most basic terms.

"Put simply, citizens must expect that when they break the law, they are subject to investigation, proceeding and sanction even if the government subsequently repeals the law that was contravened," says the CLA submission. "This is fundamental to the rule of law: a citizen is forbidden from breaking the law that exists at the time of their action."