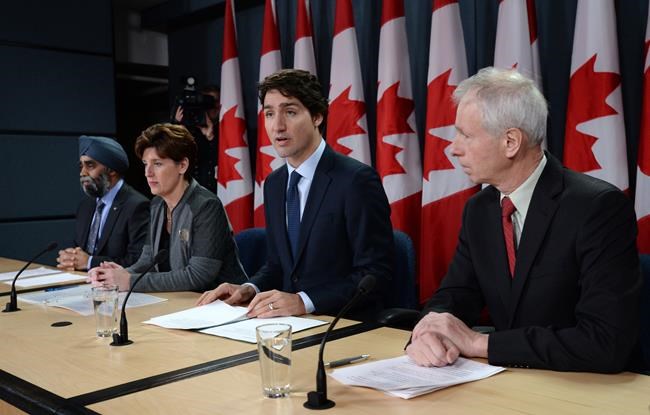 OTTAWA — Canadian military trainers will likely face "engagements" with enemy Islamic militants in Iraq, but that doesn't mean they're taking part in a combat mission, the chief of the defence staff said Monday.

Gen. Jonathan Vance offered that assessment as the Liberal government released its long-awaited and retooled strategy in the fight against Islamic militants in Iraq and Syria. The combat sorties being flown by a half-dozen CF-18 jet fighters in the U.S.-led coalition will end by Feb. 22.

In offering his view of Canada's expanded training mission, Vance went to some lengths to avoid contradicting his boss, Prime Minister Justin Trudeau, who has insisted trainers would not be involved in combat.

"The prime minister has clearly described it as non-combat" and there's a "penchant ... for people to try and parse the words," Vance said Monday during a technical briefing that followed Trudeau's announcement.

"In my view, it's a non-combat mission in that we are not the principal combatants here."

Canada's bombing mission against the Islamic State of Iraq and the Levant will be replaced by what Trudeau called an expanded mission that will focus on training local security forces and helping to rebuild the shattered region.

The number of Canadian military personnel in the region will increase to 830 people — up from the current 650 — to provide planning, targeting and intelligence expertise.

The size of Canada's "train, advise and assist" mission will also triple, including additional medical personnel and equipment including small arms, ammunition and optics to assist in training Iraqi security forces, almost exclusively in the Kurdish north.

"I want Canadians to know that we will be involved in engagements as we defend ourselves or those partners who we are working with," said Vance.

That's because the "assist function helps them plan, helps them determine how best to accomplish the missions" and by doing that, they "may very well need support in defending them — and in so doing, defending ourselves."

Vance also said Canadian troops would "mark targets" — designating enemy positions for targeting by air and artillery strikes — to both protect the Iraqi forces and their Canadian trainers.

In an interview, Foreign Affairs Minister Stephane Dion acknowledged that the circumstances of training foreign fighters on the battlefield could demand that the Canadians shoot back.

"The ones who have to free their country are the Iraqis," Dion said. The Canadians won't be involved in "front line combat," but "if their life is in danger in different circumstances, then they may have to fight."

Canada learned the hard way during 10 years in Afghanistan that airstrike operations, while useful in the short term for "military and territorial gains," do not on their own result in long-term stability, said Trudeau.

They can also be politically expedient, he suggested — a subtle jab at his Conservative predecessors who sent the jets into Iraq and Syria in the first place.

The reconfigured mission — to be extended until the end of March 2017 — includes strategic advisers to help Iraq's defence and interior ministries. Canada's CC-150 Polaris refueller and two CP-140 Aurora surveillance planes will also continue to support other coalition partners that are carrying out airstrikes.

"We're going to perfect, in fact, our efforts in targeting so that we can directly support the coalition finding targets for coalition aircraft to strike," Vance said.

The NDP accused the Liberals of "blurring the line" between combat and non-combat roles.

"Liberals are tripling the size of so-called advisers to the Iraqi military, with some forces working in a 'battlefield context' and others working to 'enhance in-theatre tactical transport,'" said critic Helene Laverdiere.

Trudeau said Monday the government would spend more than $1.6 billion over the next three years on the mission as a whole, including on security, stabilization, humanitarian and development assistance in the region. That includes $840 million to provide water, shelter health care, hygiene and sanitation, and $270 million to build capacity in those countries helping refugees from the region.

Trudeau's announcement comes before Sajjan travels to Brussels for a two-day meeting with his NATO counterparts that begins Wednesday.

Trudeau and U.S. President Barack Obama spoke Monday by phone, and the president "welcomed Canada's current and new contributions to coalition efforts and highlighted Canada's leadership in the coalition," the White House said.

"I think it's shameful."