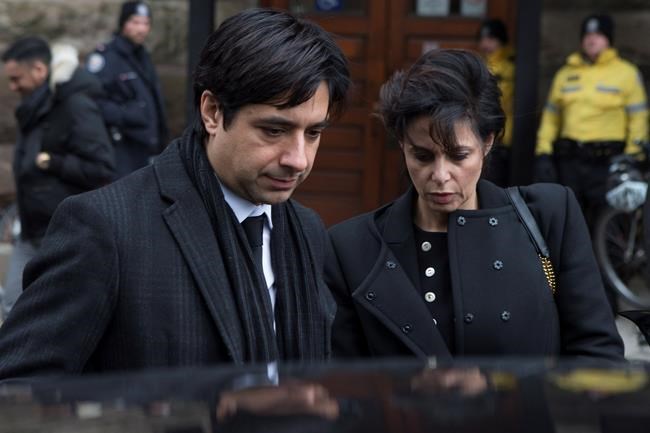 TORONTO — A Toronto lawyer who's called for substantial reforms to how the legal system handles sexual assault cases says the Jian Ghomeshi trial shows that the adversarial model presently in place is "structurally ill-suited" to deal with such allegations.

The current system is "basically trial by war," said David Butt, who has represented many complainants in sexual assault cases.

"That is probably the worst thing to do to complainants who are coming forward to talk about very intimate and distressing violations of their sexual integrity," he said.

The high-profile Ghomeshi case has seen witnesses alter their statements under relentless cross-examination that often focused on details of memories dating back more than a decade — a tactic deemed common among defence lawyers.

Ghomeshi has pleaded not guilty to four counts of sexual assault, which carry a maximum of 18 months in jail, and a choking charge that has a potential maximum of life in prison.

The Crown and the defence made their closing submissions on Thursday. Justice William Horkins is expected to deliver the verdict on March 24.

"Right now the stats on people coming forward are abysmal so we really need to build trust," Butt said. "Moving away from an adversarial model, I think, is going to be necessary because look at the Ghomeshi trial — who would voluntarily put themselves through that?"

Canada's legal system has made strides in the last few decades in trying to recognize the unique nature of sexual assault cases, including the implementation of rape shield laws that bar using a woman's sexual history to discredit her.

Sexual violence is nonetheless often kept secret: a Statistics Canada survey found that only five per cent of sexual assaults were reported to police in 2014, a proportion consistent with previous studies.

An earlier study found more sexual assault cases ended with the charges stayed or withdrawn (47 per cent) than they do with a conviction (42 per cent).

"I don't think that just taking the criminal justice system as it's designed for any kind of criminal offence and then laying that into the nature of sexual assault — I just don't think it works," she said. "So this idea of looking for ways of restructuring our legal response to allegations of sexual assault is really necessary and I don't mean just tinkering."

Creating a specialized court to deal with sexual assault cases, like those earmarked for young offenders or those accused with mental health issues, could help, although those tend to focus on the circumstances of the offender, Witelson said.

"What we need is to have people who are involved in the system — and that is judges and Crown counsel and defence counsel and perhaps a role for independent counsel who is advising the complainant directly and representing her interests directly in court — ... to have specialized knowledge about the dynamics of sexual violence and the very many ways in which people who are surviving from this kind of trauma are coping," she said.

While an alternate court would likely be an improvement, Butt said he believes the situation calls for more drastic change — one that could involve the civil courts.

In order to convict, the criminal justice system requires proof beyond a reasonable doubt, a standard that is "almost impossible" to meet, particularly in cases when the complainant and accused have an existing relationship, Butt said.

The civil system, meanwhile, needs only for one side to be more believable that the other, which increases the likelihood that someone will be held responsible, he said.

"I think a lot of complainants ... a lot of them just want validation, they want an apology, they want recognition of wrongdoing," he said.

"Until we start offering a suite of options that will give victims a real say in how this process plays out, until we start doing that, we're not going to get them coming forward. So I say the time has come to take a hard look at the options."

The allegations against Ghomeshi prompted the Ontario government to launch an action plan against sexual violence and harassment, and both Butt and Witelson said the trial has turned a spotlight on the criminal justice system.

"The Ghomeshi (trial) is a bit of a tipping point in the sense that it's consolidating this perception that we need to do something," Butt said.

"So I'm hopeful that serious discussion about reform will follow, but we're not yet having them."