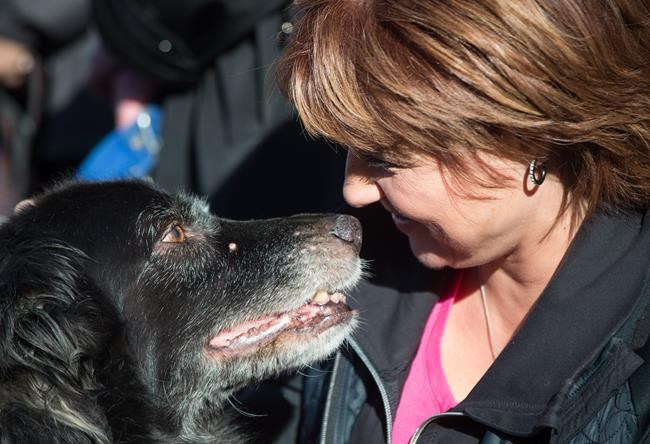 VANCOUVER — Catherine King has encountered a few distressing situations among fellow dog breeders over the 14 years she has been raising standard poodles in North Vancouver.

In one instance, she said a vendor held by many in high esteem didn't leave any water out for her dogs. In another case, she came across a breeder whose dogs had feces and discharge in their eyes.

King said she has always felt her hands were tied, but she's now hopeful that will change with prospective legislation announced Monday by British Columbia Premier Christy Clark.

The province will also adopt the codes of practice designed by the Canadian Veterinary Medical Association for kennel and cattery operations. They include rules on housing, ventilation, food and water, care and supervision, and record keeping.

"What we hope is that we will say to all of those people who are driven by pure naked greed that they are not welcome here in British Columbia," said Clark, as a dog occasionally barked in the background.

"If your desire comes at the expense of animal welfare, we don't want you working in this province."

On Feb. 4, 66 dogs and puppies in Langley were taken into care in what the organization alleges was one of the largest puppy mills in B.C. history. Some animals were suffering from infections, broken limbs and missing eyes or ears.

On Feb. 16, constables seized 82 cats and dogs from a breeding and boarding facility in Surrey. Two suffering cats had to be euthanized.

Craig Daniell, CEO of the BC SPCA, said many of the rescued dogs were found in cramped cages in dark, unheated buildings with dangerously high ammonia levels.

"These events have really reinforced the public's desire for the licensing and inspection of dog and cat breeders, to prevent the kind of suffering we have witnessed in the last few weeks."

Daniell said the society conducts about 200 investigations of animal breeders each year, most prompted by complaints from members of the public.

"Before, when doing an inspection in a pet store, we could only assume where the puppy came from," she said, explaining the benefits of provincially mandated licences.

"This is a positive step forward, it makes the individual breeders more accountable."

Advocacy group Animal Justice also lauded the intention for clear new standards, and urged the government to include provisions for regular, unannounced inspections.

It added the best way to shut down puppy mills is to end pet store sales and instead, encourage shops to offer up shelter animals for adoption.

The government anticipates the legislation would not be introduced until sometime in 2017, with consultations taking place over the coming spring.