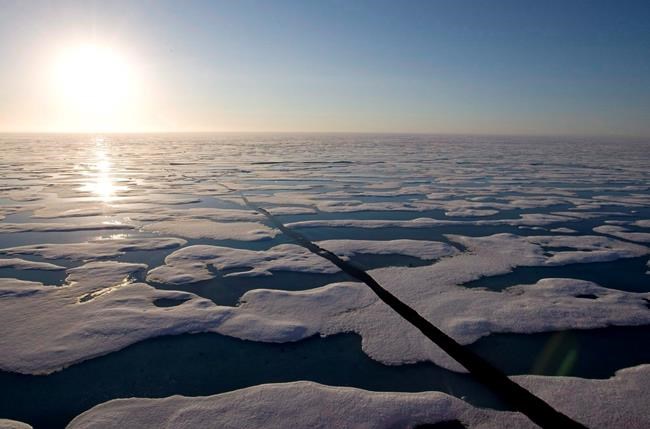 A civilian department is joining Canada's military in shopping for pilotless aerial drones to keep an eye on everything from errant icebergs to foreign fishers in rapidly opening Arctic waters.

"Transport Canada is considering the use of an (unmanned aerial system) to enhance the safety and security surveillance capability of its National Aerial Surveillance Program to survey ice and oil spills in the Canadian Arctic," confirmed a department spokeswoman in an email.

The department is calling for tenders to supply at least one such aircraft to help look for environmental problems, keep tabs on shifting sea ice and boost Canadian sovereignty over northern waters.

"Since 2009, the (surveillance program) aircraft have been used more frequently for compliance and enforcement of regulations or Canadian sovereignty," says the department's request.

"There is an increased presence of domestic marine activity and foreign vessels in the Arctic, thereby increasing the need for surveillance."

That job is currently done by three manned airplanes: one each on the Atlantic and Pacific coasts and a single, aging Dash 7 turboprop based in Ottawa dedicated to the Arctic.

The three Transport Canada planes have flown patrols for at least 12 different federal agencies — from the Defence Department to the Canadian Wildlife Service. They have been used in whale surveys and flown research flights for offshore oil regulators.

Transport Canada now thinks the job could be done better without pilots.

"Manned aircraft have limited flight time and persistent coverage is often critical during the response to an environmental disaster or a security-related event," it says. "The need for a qualified pilot on board the aircraft can restrict flight times and flying in environments that are difficult or dangerous to get to."

The request asks for at least one drone, complete with sensors, ground control equipment, satellite communications, spare parts and maintenance.

The drone must be capable of identifying and tracking everything from oil slicks to icebergs and whales to foreign fishing vessels. Its range must be at least 6,500 kilometres and it must be able to track its target for at least six hours.

One drone likely to meet those requirements is the Northrop Grumman Global Hawk, at about $300 million per new aircraft. Global Hawks are already in frequent use by the U.S. military.

The Air Force has long advocated for an armed drone system and has been shopping for one for a decade.

During Canada's military intervention in Afghanistan, it had to lease drones from an Israeli company. That program has since ended.

The Defence Department doesn't anticipate a contract would be awarded until 2020, with final delivery in 2025.

Transport Canada's tender closes March 23, but it doesn't include a time for when the drones would be in the air.

The Liberals committed to buy surveillance drones in their election platform last fall and put out a quiet call to defence contractors in January for ideas on what could be provided.

Arctic surveillance is also provided through satellites and sensors installed at choke points along the Northwest Passage.