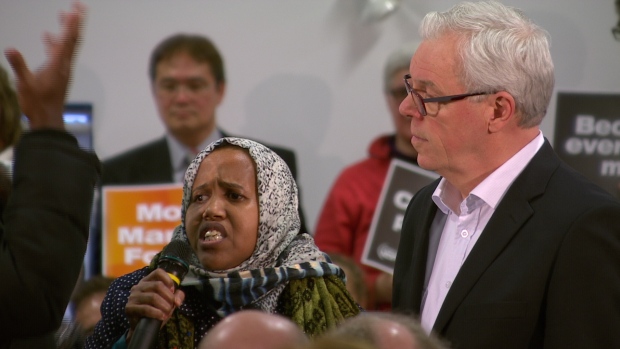 For the second time on Wednesday, Manitoba New Democratic Party Leader Greg Selinger was interrupted by protestors, including the same couple that interrupted Winnipeg Mayor Brian Bowman at an anti-racism event in January.

Selinger was interrupted for the first time on Wednesday when the Canadian Taxpayers Federation showed up with their mascot, Fibber.

The mascot, dressed to look like Pinocchio, had his nose outstretched in reference to Selinger’s decision to raise the Provincial Sales Tax after he promised not to in 2011.

On Wednesday night, at a rally Selinger held to kick off his campaign, he invited a woman and man to climb on stage. While there, the woman took the mic from him and started shouting complaints about Manitoba’s Child and Family Services.

“I come here for humanity,” she