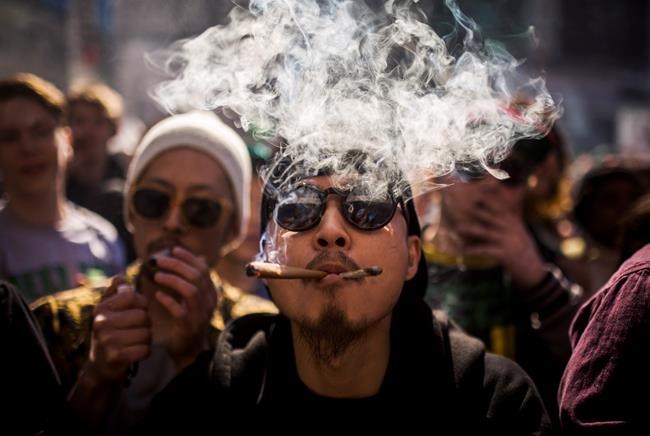 VANCOUVER — Stoner subculture will likely take a hit with the incoming legalization of marijuana in Canada because as the cause vanishes, so will celebration of the drug, say experts.

The declaration comes as the federal government announced a spring 2017 deadline for introducing new marijuana laws and while thousands of people gathered across Canada for the annual April 20 'Weed Day' protest, also known as 4-20.

Protesting against cannabis prohibition has become a social movement with its own ideology and symbols, but that will likely change with the repeal of criminalization, said Benedikt Fischer, a senior scientist with the Centre for Addiction and Mental Health.

"Once marijuana becomes legalized, normalized, mainstream, the cause disappears," said Fischer. "I suspect these things will kind of fizzle away."

Lynne Belle-Isle, co-founder of the Canadian Drug Policy Coalition, agreed that with legalization the appeal of smoking up in rebellion could disappear. She said society could benefit as messaging is developed around using the drug more safely.

"Like alcohol, if you see your parents having a glass of wine with dinner, it's no big deal. You learn responsible use if that's what you're exposed to," she said.

"Social norms get created when you're able to do it openly, that doesn't happen when people have to hide."

One of Canada's most prominent pot protests on Wednesday was at Vancouver's Sunset Beach, with participants lighting up and eating marijuana edibles in a traditional act of mass civil disobedience.

And just like past years, a festive atmosphere rose from the crowd of revellers who mingled around a farmer's market-style cluster of vendors, a stage and rows of portable toilets.

Participants buzzed over free guidelines books including a site map, messages about safe marijuana use and political slogans. Organizer Jodie Emery said $100,000 was raised to fund amenities and security for the all-day cannabis culture bash.

Last year, health officials said that more than 60 people were treated in hospital for complaints of symptoms ranging from upset stomachs to acute anxiety and psychosis. Three-quarters of them had consumed edible marijuana products.

Earlier in the day, Health Minister Jane Philpott told a special United Nations session on drugs that the Liberal government is convinced marijuana legalization is the best way to protect youth and enhance public safety.

In an emotional address, she told delegates that Canada must do better when it comes to drug policy. She said Ottawa's approach will be rooted in science.

"If you make it look fun, more people will participate," he said.

"We're going to dance down the streets and ... puff on our magic flower. Once everyone is free it will turn into a formal celebration. And until everyone is free, it's still a protest."

Ellis Worthington, 30, wearing a T-shirt on Sunset Beach reading "I toke and I vote," said he believes legalization will see pot treated like alcohol.

"I think it will become a part of everyday life," he said. "You can go to an event, go to the beer garden and get some bud."

Documentary filmmaker Leandro Vilaca, 33, said legalization will change the way marijuana is branded but it will keep its image as cool and creative.

"As soon as we open it up, it will become like tomatoes," he said.

"When you go to Kelowna, you see wineries. When you come to Vancouver, you see dispensaries."