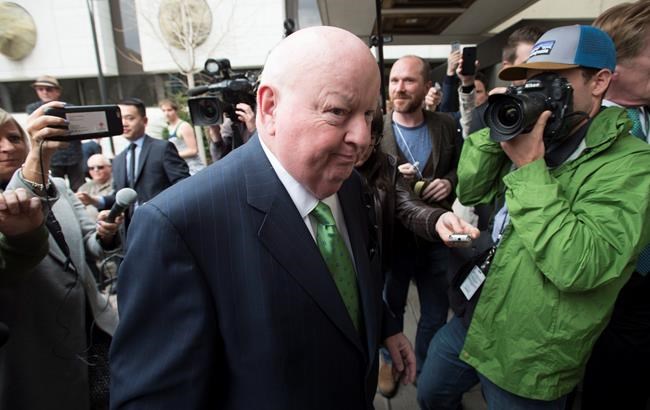 OTTAWA — There were no apologies from Conservatives on Friday following a scathing court judgment that exonerated Sen. Mike Duffy of 31 expense-related criminal charges while indicting his former political masters in the Prime Minister's Office of Stephen Harper.

Only Conservative MP Candice Bergen was willing to speak with reporters, offering up a stout defence of Harper's leadership while avoiding the specifics of the Duffy verdict.

Tight, centralized control from the Prime Minister's Office isn't a new story in Canada's parliamentary system, but the Duffy trial testimony and judgment gave rare insight into what Vaillancourt described as a "mind-boggling and shocking" case study.

Donald Savoie, a political scientist who literally wrote the book on "court government," said in an interview that his 1999 academic treatise "Governing From the Centre" was considered a bit over the top at the time.

"Clearly I didn't overstate the case," Savoie said Friday from his University of Moncton office.

"They over-played their cards," said the acclaimed student of governments and bureaucracies. "It demonstrated tremendous disrespect for the institutions of the land, for parliament, for the Senate, for the House of Commons."

"I think the lesson learned for the current PMO is, look, guys and gals, you can't push your weight around like that anymore. It doesn't work. The level of transparency now (means) we will know."

Harper, still the MP for Calgary-Heritage, did not respond to a request for comment through his office.

Conservative interim leader Rona Ambrose was not in the House of Commons and top former cabinet ministers who were on hand, such as Jason Kenney and Peter Van Loan, exited by back doors rather than face reporters seeking reaction to the ruling.

Former cabinet member Michelle Rempel, usually a garrulous and open MP, offered a terse "no comment" as she sped past the microphones.

Only Bergen, the Conservative MP for Portage-Lisgar and former minister of state for social development, was prepared to face the news cameras and defend her old government.

"I would respectfully disagree with people, including the judge, who somehow thinks that we were all told what to do at the PMO," said Bergen.

She said the Conservatives worked as a team, while acknowledging Harper's image problem as a control freak, contrasting him to current Prime Minister Justin Trudeau.

"It was the narrative because Mr. Harper wasn't the selfie king at all. He wasn't in GQ (magazine)," said Bergen.

"He wasn't talking with all of you (news media) folks as much as you probably would have wanted. The narrative then was he's controlling, he's a dictator. That was the narrative. It wasn't true. He was a strong, strong leader."

With Duffy fully reinstated in the Senate and former PMO staff scattered to the winds, NDP MP Peter Julian was left to wonder, "who's taking responsibility for this fiasco?"

John McKay, a veteran Liberal MP who's now parliamentary secretary to the defence minister, gave a surprisingly frank response when asked how Canadians can know that the same old centralized power won't continue in the Prime Minister's Office.

"In some respects you don't," said McKay.

He then pointed to Trudeau's decision to remove all Liberal-appointed senators from the party caucus and create a more partisanship-free Senate appointment process.

"That creates its own level of difficulties," said McKay. "In fact, we're in kind of a no-man's land as to how we get our own legislation through."

The Senate will be forced to firm up its rules and regulations, Senate appointments will be less partisan and the PMO has been proven vulnerable to exposure of its inner workings.

"I think change will come about and we've started to see it," said the academic.