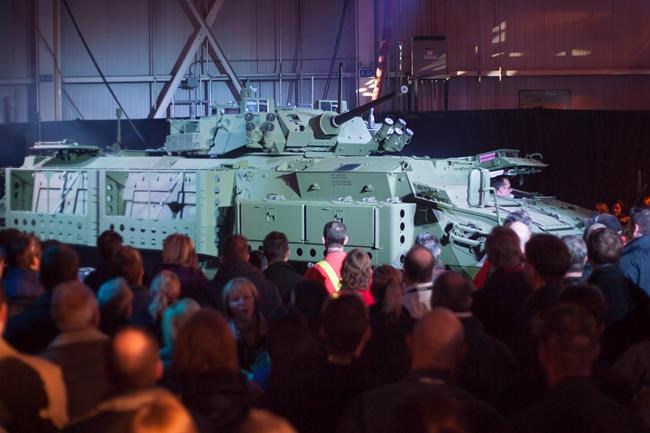 Kim Won-soo, the UN's High Representative on Disarmament Affairs, offered that assessment in an exclusive interview with The Canadian Press following his Monday meeting with Foreign Affairs Minister Stephane Dion.

Kim stressed he was not taking any position on the controversy that has seen a coalition of peace and human rights organizations pressing the Liberal government to cancel the sale of the LAV3s to Saudi Arabia because of the country's poor human rights record.

The Liberals are honouring the deal, agreed to by the previous Conservative government in February 2014, because they say they have no legal basis to cancel it, and doing so would harm the country's international trading reputation.

Kim made clear he didn't want to discuss the controversy, saying he hadn't waded into the details of it.

But Kim's analysis of the limitations of the Arms Trade Treaty undercut the criticism levelled at the government last week in an open letter by Amnesty International and Project Ploughshares, among others.

"Your government's authorization of this deal also casts serious doubt over Canada's readiness to abide by the legally binding obligations and intent of the Arms Trade Treaty, which Canada has announced it will join in the near future," the coalition said in a letter to Prime Minister Justin Trudeau and his cabinet.

Kim rejected a suggestion that the ATT would put a damper on country-to-country arms exports when one of the countries has a less than stellar human rights record.

The Liberal government pledged to make Canada a signatory to the UN treaty during last year's federal election. The previous Conservative government refused to sign it, saying it would compromise the lawful rights to Canadian recreational firearms enthusiasts.

The United States signed the treaty, despite its ferocious domestic pro-gun lobby, but Saudi Arabia has not.

Kim said the treaty would place additional burdens on countries that export small arms and military equipment to ensure the weapons are not diverted to third parties, or  misused by the actual recipients for nefarious purposes.

He said the exporting countries need to show "due diligence" that the military goods they are selling are not used by the wrong people, for the wrong reasons.

"The Arms Trade Treaty is about regulating the arms trade with the particular emphasis that arms sales will not end up in the wrong hands, and also will not be used for bad purposes."

A human rights assessment released by Dion's office acknowledged that Saudi Arabia has a poor human rights record, including cracking down on dissent and subjugating women. But it concluded there is no evidence the armed military vehicles would be used by the Saudi government against its people.

The assessment concluded there was nothing to suggest the armed vehicles would be used for anything but their intended purpose — helping Saudi Arabia defend itself against the same Islamic State militants that Canada and its allies are fighting in the Middle East.