Feds set to introduce bill on the Canada-U.S. border 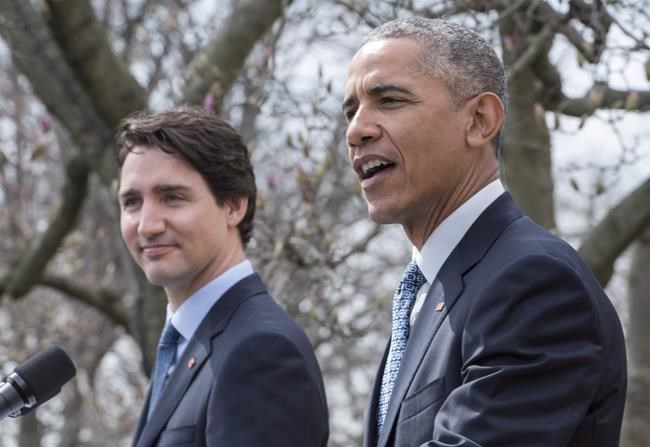 WASHINGTON — The federal government is preparing to introduce legislation that will establish rules for a new border-crossing experiment that could change the way travellers enter the U.S.

It will spell out the rights and responsibilities of U.S. customs agents working on Canadian soil, under the preclearance project recently announced by Prime Minister Justin Trudeau and President Barack Obama.

The project will expand a system already in place for air travel — where passengers at major airports clear customs before taking off, and skip potentially longer lines in the U.S.

Announced during Trudeau's first official visit to Washington, preclearance is being extended to land travel with the first pilot projects occurring at train stations in Vancouver and Montreal.

Legislation will soon establish rules for the new system.

"We're going to be aiming for a spring introduction," said Chrystia Freeland, the minister who runs the cabinet committee on Canada-U.S. relations.

"We are hard at work on it — and we're confident we're going to get it done. There is strong support for it across the government — this is something that our government is really in favour of."

Freeland was in Washington last week to prepare for the first North American Leaders' Summit in two years. She promised a new emphasis on trilateral co-operation, as the presidents of the U.S. and Mexico visit Canada next month.

She said the new rules for land travel will be based on existing ones for airports. Preclearance is already the norm at eight airports and is being introduced in Quebec City and downtown Toronto.

Under the 2001 airport deal, American agents can detain travellers in Canada — but it would be up to domestic police services to make a formal arrest. Also, American officers can be present for a strip search, but not when it involves travellers of the opposite sex. Other provisions govern the ability of agents to carry firearms.

"This is not a newfangled thing. We have preclearance (at airports)," Freeland said in an interview. "It works very well for Canadians, and that's why we're keen to extend it and formalize the structure a bit more."

Preclearance could potentially become widespread with people clearing customs at major train stations, bus stations and even off the side of highways before they reach the border.

Freeland said the governments are approaching it one initiative at a time.

The land-preclearance agreement was first announced by the former Conservative government and the Obama administration, but implementing legislation had never been passed.

There was some uncertainty about whether the new Liberal government would remain committed to it; Trudeau answered that question by announcing the train-station pilot project during his White House visit.

A prominent business group welcomed news of the bill. It's also awaiting a twin version of the bill in the U.S. Congress. Such legislation had been introduced this spring in Washington with bipartisan support, but got sidelined in an unrelated dispute over other provisions of an omnibus bill.

She said preclearance will make for the smoother movement of people and products, allowing people to deal with customs early — before bottlenecks happen the border.

The Canadian government has apparently concluded that the economic benefit warrants the cost. Canada will pay for U.S. customs infrastructure on Canadian soil.

"We're ready to do that," Finance Minister Bill Morneau told reporters last month during a trip to Washington.

"We want to have the best possible flow of people, goods and services. So making an investment in that regard would make sense. Every one of these specific decisions will have to be taken on its specific merits."