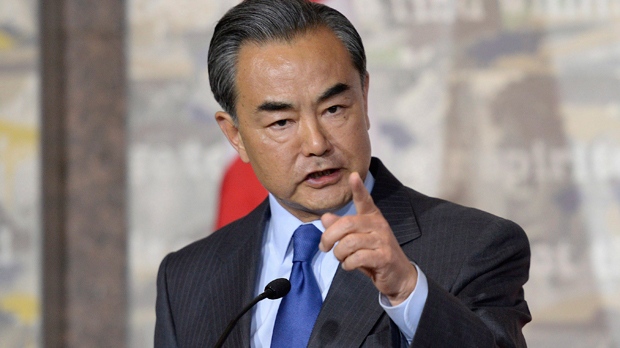 Chinese Foreign Minister Wang Yi said it was "irresponsible" of a journalist from the web outlet IPolitics to ask about human rights and the jailing of a Canadian, Kevin Garratt, who is charged with espionage.

Wang appeared visibly angry as he delivered the scolding in the lobby of Global Affairs headquarters at a joint news conference with Foreign Affairs Minister Stephane Dion.

"Your question is full of prejudice and against China and arrogance ... I don't know where that comes from. This is totally unacceptable," Wang said through a translator.

"So I would like to suggest to you that please don't ask questions in such an irresponsible manner. We welcome goodwill suggestions but we reject groundless or unwarranted accusations."

The IPolitics question was agreed to by a number of journalists representing several news organizations at the event, including The Canadian Press.

Wang asked the journalist if she'd ever been to China and whether she knew Canada had lifted 600 million people out of poverty to become the world's second-largest economy. "Do you know China has written protection and promotion of human rights into our constitution?"

Earlier, Dion said he and Trudeau raised Garratt's case with Wang and never misses an opportunity to raise human rights and difficult consular cases, saying he and Wang had "honest and frank conversations on human rights and consular affairs."

"These discussions are central to a healthy relationship," Dion said. "We expect that we will not always see eye-to-eye with each other, but we need to make progress."

China and Canada also agreed to disagree on the contentious issue of Beijing's behaviour in the South China Sea, Dion said.

High-seas geopolitical tensions in Asia and free trade aspirations hung over Wang's visit to Ottawa, which also included a talk with Prime Minister Justin Trudeau and his cabinet.

Dion said he had "mature and respectful discussions on our respective positions on regional issues including the South China Sea."

He said Wang was passionate, but so too are China's neighbours.

China wants to negotiate a free trade deal with Canada, but neither Wang nor Dion had anything new to announce on that front on Wednesday.

Wang noted Canada's free trade deal with South Korea and said he realizes it is pursuing similar deals with India and Japan.

"I would like to suggest Canada to negotiate FTA with the Chinese side, but here I must emphasize we will never impose our own will on our friends. It's up to you."

Wang also recalled the positive strides Trudeau made with Chinese President Xi Jinping during his first round of international travel last fall. The Chinese leader praised the vision of Trudeau's father, Pierre, for establishing diplomatic relations with the People's Republic in 1970 during a meeting at the G20 in Turkey.

Wang made no mention of former Conservative prime minister Stephen Harper, whose near-decade in power started on a frosty note when he was accused of snubbing Beijing.

Visiting foreign ministers usually stick to talking to their counterparts, but Wang also inserted a meeting with Trudeau, which underscores the importance the government is placing on China at a pivotal time.

"We stand ready to work together closely with the Canadian side and take the opportunity of the new government in Canada to open up a new golden era of our bilateral relations."