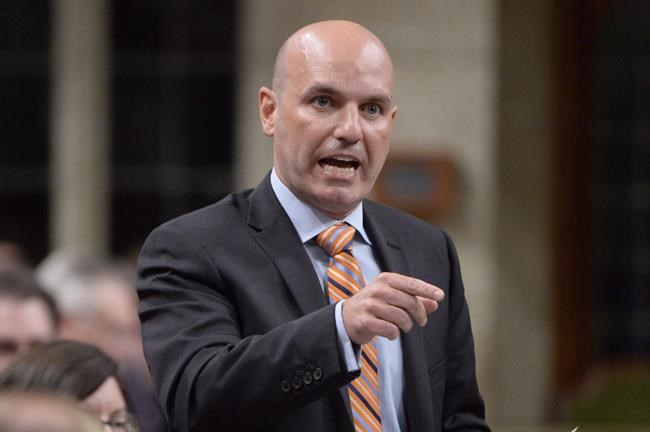 OTTAWA — Veteran NDP MP Nathan Cullen was seen as a front-runner to succeed Tom Mulcair as party leader, but not any more.

Cullen announced Friday that he wouldn't take another run at the leadership in order to spend more time with his family, including his twin sons who turn six this summer, and focus his political energy on the electoral reform and climate change files.

Cullen, first elected in 2004 to the sprawling northwestern B.C. riding of Skeena-Bulkley Valley, ran against Mulcair in the party's 2012 leadership race, ultimately coming in third behind runner-up Brian Topp.

He said his decision to forgo another run came after much thought and discussion with family, friends, supporters and party elders.

"Some people have said you should take six more months, but I don't know, that's just not the way I'm built," he said outside the House of Commons.

"I don't necessarily think six more months would have really developed anything new for me, so why wait? Why pretend? Let's just be straight with people and be honest."

He said the decision was what was best for his family, his constituents and the party itself.

NDP MP Don Davies, a fellow New Democrat from B.C., said Cullen's decision is a loss for the party and the country.

"He's proved himself to have that rare quality of being able to work across party lines, that I think not only Canadians like, but I think is the tenor of the times right now," Davies said.

"It's part of Mr. Trudeau's attraction as well, and I think Mr. Cullen has similar type of charisma and appeal."

Cullen's decision should open the door for other potential candidates to begin declaring when the nomination period opens next month.

The party has opted for an extended leadership race to replace Mulcair and expects to choose a new leader sometime in the fall of 2017.

Mulcair was flatly rejected as the party's long-term leader at a convention in Edmonton last month, when more than half the delegates voted for a leadership race.

Already, a number of expected front-runners and contenders have publicly rejected a bid for the job. Former deputy leader Megan Leslie has ruled out a run, as has Topp, now serving as chief of staff to Alberta Premier Rachel Notley. She, too, has indicated she's not looking to make a jump to federal politics.

Cullen said he has spoken a number of his colleagues in the party who would be good candidates to become the new face of the NDP. He also said he plans to get involved in the leadership race and back a candidate.

To run, hopefuls will be required to pay a registration fee of $30,000 while the campaign spending cap has been set at $1.5 million.

The party suffered a sharp rejection in the October election, losing more than half its seats and dropping back to third party status.

Cullen said, though, that will change.

"We will be ready again to form government again in just a few short years," he said.