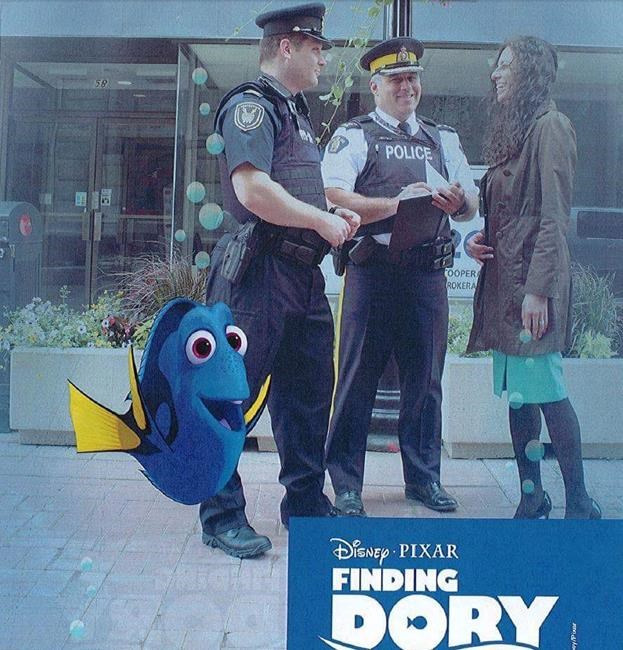 OTTAWA — Some fishy business between Parliament Hill security officers has led to several of them being threatened with disciplinary action over social media postings about a photo of their new uniforms.

It's the latest manifestation of tension between the historic House of Commons security detachment and the RCMP, forced to merge into a single parliamentary protective detail after the 2014 shooting attack on Parliament Hill exposed flaws in the previous system of distinct security services.

The force will begin wearing new uniforms on Friday; a promotional photo for the outfits was taken earlier this month featuring two officers wearing the new kit.

But a version of the photo superimposed with images from the Disney movie "Finding Dory" was posted inside the Hill's communications centre, with a description claiming it was part of an ad campaign to promote the uniform.

Many longtime Hill security staff viewed it as a slight and posted copies of the image on social media sites, accusing the RCMP of making fun of them and writing comments such as, "We are now officially a Mickey Mouse organization."

All of the social media posts have since been deleted, but not before they drew a sharp rebuke.

"Public forums, which include social media, are not to be used to vent or defame (parliamentary protective service) or fellow employees, and those who chose to do so will be held accountable and disciplined accordingly," read a memo sent Monday by Michael Duheme, the director of the protective service.

Several officers — including some who were on the Hill the day of the Oct. 22 shooting — are being called before a committee to explain their actions, and could face punishment as severe as suspension.

The flare-up came after months of simmering frustration over the gear, including Hill officers not receiving appropriate outdoor winter gear comparable with that of the RCMP and concerns female officers were being made to wear men's clothes.

None of the Hill security staff contacted by The Canadian Press would speak publicly, for fear of further retribution.

The doctored photo prompted rumours the Mounties were again linking up with Disney for a promotional campaign; in the 1990s, the force had a deal with the company to market and license RCMP products.

"There is no partnership with Disney and there is no date set at this time for the promotional roll-out of the uniform," she said when asked about the photo.

Mineault did not respond to further requests for comment.

Late Wednesday, Duheme sent a memo to staff declaring Friday as the first day for the new uniforms — and offering an olive branch.

"We'd like to take this time to acknowledge and recognize the historic contributions of the former security service providers," he wrote, "and we hope that on June 17th, 2016, you join us with enthusiasm as we take another step towards solidifying PPS' consequential role as the Parliamentary institution responsible for ensuring the safety and security of the parliamentary precinct and the grounds of Parliament Hill."