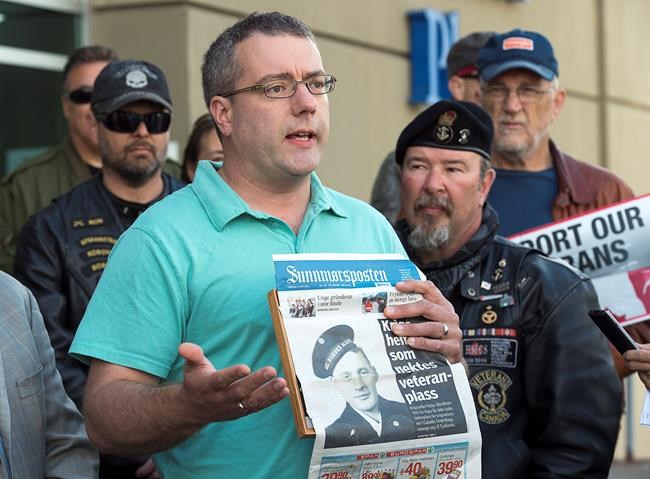 HALIFAX — The plight of a decorated 94-year-old veteran seeking a bed in a Halifax veterans' hospital has turned Liberal against Liberal, with Nova Scotia's premier unleashing some mildly unparliamentary language to describe Ottawa's behaviour on the issue.

Stephen McNeil resorted to unusually candid terms after a cabinet meeting Thursday while commenting on a ruling by Veterans Affairs against Petter Blindheim's bid for a bed at the Camp Hill Veterans Memorial hospital.

"I'm trying to find an appropriate word that I can tell you on the news, but there has been more bureaucratic BS associated with this issue and the national government needs to do the right thing and treat this vet with the dignity he deserves," the premier said.

Later in the morning, angry veterans demonstrated in front of a federal office in Halifax, saying the Trudeau government is betraying their trust by refusing to fulfil election promises of creating a more flexible department.

"Denials, denials ... To say many of us are disgusted by this act is an understatement," said organizer and fourth-generation veteran Doug Roberts.

"This is wrong. These men are our brothers. We will not take this lying down," he said as members of Blindheim's family stood nearby.

Ottawa initially rejected entry to Camp Hill for Blindheim, a veteran of the Norwegian Royal Navy and merchant marine, because it said the Norwegian forces fighting from England didn't qualify as official allies.

The department recanted that position, but then on Monday again rejected the former sailor — who has fallen repeatedly and broken his arm — on the basis that Ottawa can pay for any necessary care at provincial facilities.

McNeil had little time for that argument.

"Our national government has space in Camp Hill. They have beds, somewhere near a dozen beds are not being filled. They should provide one of those beds to this man," he said.

"They know very well, like every Nova Scotian knows, that the beds that we have in long-term care facilities in Nova Scotia are full. There's a waiting list to get into those beds."

A spokeswoman for federal Veterans Affairs minister Kent Hehr said Ottawa can't comment on the case, but says the Liberals have not retreated from their commitments to veterans made during the federal election campaign.

"While we always work to deliver the support a veteran and their family needs, it is not always possible to do so in a specific facility of a veteran's choosing," she wrote in an email

"Whatever level of care a veteran needs, we will provide the support."

Sarah McMaster also says Liberal election promises are being kept, including a vow to reopen and staff the nine Veterans Affairs service offices that were closed by the former government.

However, the veterans groups are citing the Blindheim decision as a sign there hasn't been a change of attitude among Veterans Affairs civil servants when it comes to exercising flexibility with the rules.

Peter Blendheim, whose first and last name is spelled differently from his father's, says the solution being proposed is unrealistic because the median waiting time for a provincial nursing home space in Halifax is 285 days, and his father needs nursing home care soon to avoid more injuries.

He adds that the care at Camp Hill is of a higher quality due to the higher daily funding it receives, and that his father should be with other veterans.

The Nova Scotia Health Authority says that Ottawa provides $400 per day for veteran's care at Camp Hill, while the average cost for the provincial facilities is $250 per day.

During the afternoon, Blindheim received a medal for his war service from the Royal Norwegian Embassy during a ceremony at a Halifax hotel.

Blindheim has been decorated for rushing to the deck as his ship sank during the Second World War and removing the primer from a depth charge he feared would explode and harm his comrades.