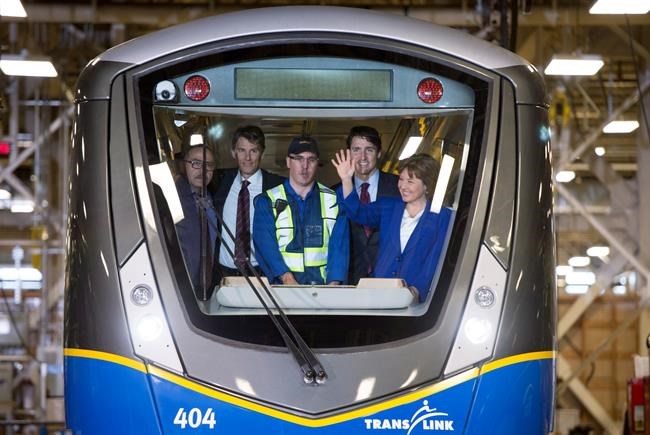 BURNABY, B.C. — British Columbia has become the first province to reap dollars for its transit system under the federal government's ambitious multibillion-dollar infrastructure program, with more deals expected to be signed elsewhere in Canada next week.

"I'm proud that the very first such agreement that we've signed is right here in British Columbia, although we are working hard to close deals with other provinces," Trudeau said Thursday at the SkyTrain operations centre in Burnaby.

He said $370 million has been allocated for transit projects in Metro Vancouver, while a total of $934 will be invested in public transit across B.C. when provincial and municipal contributions are included.

The money comes after Metro Vancouver mayors have spent years trying to find ways to pay for upgrades and expansions to a transit system that is inadequate for a growing population. An estimated one million more residents are expected to move to the region over the next 30 years.

On Wednesday, a Senate committee warned that none of the $6.8 billion in infrastructure money promised to cities and provinces for transit, green and social infrastructure had flowed because of a lack of funding agreements.

At least two more deals could be signed next week in other jurisdictions, and the remainder of the promised agreements could be inked with all provinces and territories within months, an Infrastructure Canada spokeswoman said.

"(Negotiations) are going well in many provinces," Kate Monfette said from Ottawa after Thursday's announcement.

"If things continue the way they are going, by the end of the summer we're confident that we could sign everything."

Monfette wouldn't specify which deals are making swiftest progress, but noted funding agreements will cover projects that started as of April 1.

She said it was "a close race" among provinces to procure funding first and that B.C. was the fastest to assemble its wish list of transit projects.

The federal government promised in its March budget to fund up to 50 per cent of the provinces' and territories' public transit and clean water and wastewater projects as part of a $5.4-billion infrastructure package.

The funds are part of phase one of the government's infrastructure plan, which focuses on repairing and modernizing existing infrastructure. Phase two will include big, transformative projects but plans are not expected to be revealed until next year.

Trudeau, British Columbia Premier Christy Clark and Vancouver Mayor Gregor Robertson arrived by SkyTrain for the announcement at a cavernous rail house as hundreds of maintenance workers and transit staff looked on.

Clark praised Trudeau for the investment that she said will ensure commuters spend less time on the road and contribute to the province's goal of fighting climate change.

Robertson said the funding "makes sense" because municipalities contribute about half their tax dollars to the federal government.

Fourteen projects have been identified for the first two to three years of a 10-year regional transit plan.

Robertson said the Broadway subway line in Vancouver and a rapid transit project in Surrey are expected to break ground within 18 months.

Metro Vancouver has a long list of transit projects, but residents voted down a proposed sales tax in a plebiscite last year to pay for a 10-year, $7.5 billion transit plan.

After the announcement, Robertson said the $125 million comprising the municipalities' share for phase one comes from the regional transit authority's assets, including the sale of surplus property.

Robertson said mayors are waiting on the provincial government to approve municipalities' methods for generating funding for phase two, including potentially raising the carbon tax, property taxes and development fees.

He said they were not looking at holding another plebiscite.

Note to readers: This is a corrected story. A previous version said the federal government committed $470 million.