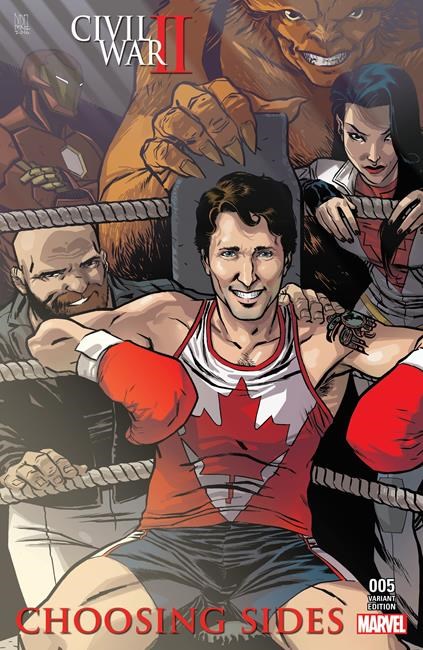 TORONTO — Make way, Liberal cabinet: Prime Minister Justin Trudeau will have another all-Canadian crew in his corner as he suits up for his latest feature role — comic book character.

Trudeau will grace the variant cover of issue No. 5 of Marvel's "Civil War II: Choosing Sides," due out Aug. 31.

Trudeau is depicted smiling, sitting relaxed in the boxing ring sporting a Maple Leaf-emblazoned tank, black shorts and red boxing gloves. Standing behind him are Puck, Sasquatch and Aurora, who are members of Canadian superhero squad Alpha Flight. In the left corner, Iron Man is seen with his arms crossed.

"I didn't want to do a stuffy cover — just like a suit and tie — put his likeness on the cover and call it a day," said award-winning Toronto-based cartoonist Ramon Perez.

"I wanted to kind of evoke a little bit of what's different about him than other people in power right now. You don't see (U.S. President Barack) Obama strutting around in boxing gear, doing push-ups in commercials or whatnot. Just throwing him in his gear and making him almost like an everyday person was kind of fun."

The variant cover featuring Trudeau will be an alternative to the main cover in circulation showcasing Aurora, Puck, Sasquatch and Nick Fury.

Trudeau follows in the prime ministerial footsteps of his late father, Pierre, who graced the pages of "Uncanny X-Men" in 1979.

Edmonton-born artist and writer Chip Zdarsky said he was approached by Marvel to write an Alpha Flight story and knew right away he wanted Trudeau included.

"I kind of figured to do a story about Canada right now and not take that opportunity to put Trudeau in seemed like a waste.

"He seems to be the popular culture association with Canada right now, right behind (Toronto rapper) Drake — and I probably couldn't get Drake in the comic," Zdarsky added, laughing.

Zdarsky reached out to the Prime Minister's Office to inform them of his plans and was told that, while they couldn't endorse the comic, they were fine with him proceeding.

The story involves a mysterious new Marvel character, Ulysses, who has the power to calculate the outcome of future events with a high degree of accuracy.

The Marvel heroes are divided on how best to capitalize on the predictive power. Carol Danvers — also known as Captain Marvel —  is in favour of profiling future crimes and attacks before they occur, while Tony Stark (Iron Man) believes the punishment can't come before the crime.

Alpha Flight — formally the Canadian peacekeeping force — is supportive of using Ulysses to stop disasters and capture people, but there are also ethical conflicts within the group, Zdarsky noted. Despite being part of an international agency, the team feels they're "Canadian first" and seek out Trudeau for advice, he added.

"I didn't want this to just be like a walk-on ... rescued by superheroes and he thanks them and that's the end of the story," Zdarsky said. "I think a lot of these real-life appearances in comics tend to go that way. I liked the idea of him actually engaging them in an ethical debate.

"It's a little tricky just because once you start to put words in the prime minister's mouth, we acknowledge that this is basically Trudeau fan fiction," he added.

"I had to kind of think about where he would stand on something like that and how he would handle it. Hopefully, I did a good job. Maybe I'll get a call from him saying: 'How could you have me saying that to ... Iron Man?'"

Perez said he didn't want to do a direct photo trace of Trudeau, opting instead for a "happy medium" balancing realistic interpretation with cartooning.

"I actually look like I have a bit of an altar to Justin Trudeau on my computer," Perez added.

"I have about 20 photos of him lined up on my monitor as I'm drawing and trying to make sure from every angle I'm tackling him on, I'm trying to do my best representation of him. Not only getting that likeness, but also translating his personality in that likeness as well."

Issue No. 5 of "Civil War II: Choosing Sides" can be pre-ordered through any local comic retailer, and is also available for digital pre-order through Marvel's Digital Store.