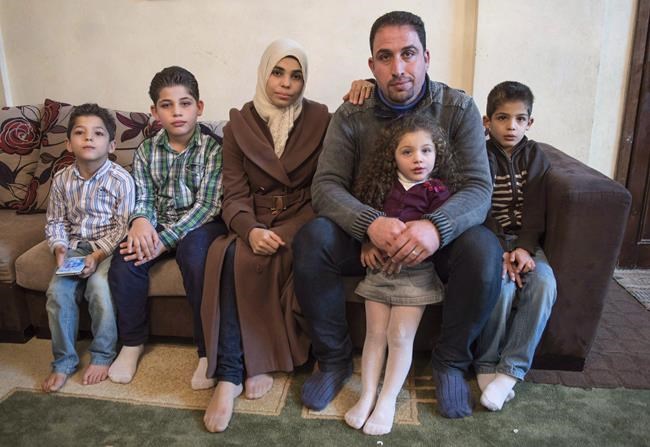 OTTAWA — It's been eight months since Asmaa Alhajali said good bye to her cousin's family as they left Jordan for Canada as four of 25,000 Syrian refugees who settled here last winter.

She's watched them ease into life into Orangeville, Ont. and heard about the kindness of Canadians, the cold of winter, their children's new school.

The two kids have become mini-celebrities, appearing in a Google video highlighting the use of the search engine's translation services to teach Syrians English.

And Asmaa's kids could have been right beside them.

But her family of six is among 17,000 Syrian refugees whose applications are still being processed by the Liberal government months after the launch of the ambitious settlement program that's drawn praise from around the world, including from U.S. President Barack Obama during last week's visit to Ottawa.

"I will never regret taking this chance to make a better life for my children," Asmaa said in an interview from Jordan through a translator.

"But we are left confused."

In the days after the Liberal government unveiled its plan to bring 25,000 Syrians in Canada in a matter of four months, Asmaa's family and her cousin Emad's brimmed with excitement over their impending move to Canada.

Both families had found sponsorship groups in the same city and walls of the apartment they shared were covered with list of English words and their Arabic equivalents as they prepared together for the move.

They didn't think they'd go at the exact same time as Emad's application had been submitted long before the Liberals even took power, while Asmaa's wasn't formally submitted until much later. But they figured the scale of what the Liberals were doing meant they'd be together again before too long.

Weeks after the family left, Asmaa's family was interviewed and had their medical tests, among the thousands of cases being processed as part of the Liberal program.

But that large scale effort — hundreds of staff overseas, charter and military flights — ended on Feb. 29 with no decision on their file.

As private sponsorship groups, including theirs, learned processing would go back to its previous snail's pace, an outcry ensued. The Liberals promised they'd expedite all cases received before March 31 and brought in additional staff again.

For weeks, Asmaa would get excited every time the phone rang, thinking it was the Canadian government saying her family would soon be on its way.

But the second staffing boost wrapped up quietly late last month with no call.

"We can't make any clear plan for our life here or there," she said.

No one will give her husband a full time job because everyone knows they might leave Jordan suddenly. Her kids are frustrated, having lost their best friends and now living in a neighbourhood where it takes twice as long to get to school and Syrians are not well liked. To save money when their cousins left, the family had downsized into a one bedroom apartment

The stifling heat inside is particularly difficult when they hear the cousins are taking swimming lessons, she said.

"I want Canada," three-year-old Abeer she says as she squirmed over her mother's lap.

The family and their sponsorship group believe their security clearance is being held up because Asmaa's husband was born in Saudi Arabia so getting the background information is taking longer.

But even that sliver of information was nearly impossible to get, said Ian McSweeney, a member of the sponsorship group.

A initial letter to the immigration minister came back filled with political non-answers, he said. When he asked another MP what his group should do with the house they'd rented and supports they'd lined up for the family, he was told he should calm down because "nobody in the government told you to spend the money."

McSweeney said the government failed to manage expectations from Syrians and Canadians on the realities of the resettlement program and he expected more.

"I get it, the government is busy," he said.