Obama to huddle with European Union leaders over Brexit 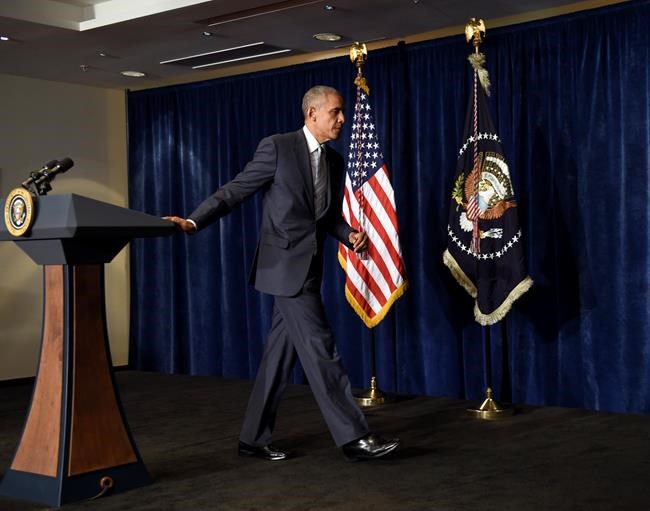 WARSAW, Poland — President Barack Obama will huddle with European Union leaders to discuss how the 28-member body plans to disentangle Britain from its ranks, diving into a four days of diplomatic talks aimed at reinforcing Europe's alliances.

Before opening a NATO summit, Obama is due to meet Friday with European Council President Donald Tusk and European Commission President Jean-Claude Juncker. The president plans to urge the leaders to step carefully into the exit negotiations, which have not yet been formally triggered by Britain and could take up to two years.

Obama will stress "we want to also be acting in a way that minimizes the risks to the global economy, that provides reassurance to financial markets, and that allows for an orderly process should Article 50 be invoked, as we fully expect it will be, and those negotiations go forward," said Ben Rhodes, a deputy national security adviser.

Although the U.S. has keen interest in the talks, the president's words have limited impact and influence. Obama's trip, which includes a stop in Spain, is expected to be his last trip to Europe as president. The task of trying to shape the talks to serve U.S. interests and mitigate damage largely will fall to his successor.

Still, in his remaining time in office, Obama has sought to use his popularity in Europe and his presidential megaphone to defend international and the "European project" and will urge other leaders to speak up more forcefully.

The White House has acknowledged that Obama's message has to some degree failed to persuade on both sides of the Atlantic. Republican presidential candidate Donald Trump has suggested he would seek to pull back from Europe, even hinting the U.S. could withdraw from NATO, the 67-year-old cornerstone of European security. His Democratic rival, Hillary Clinton, has suggested she would continue, if not deepen, Obama's approach. But even Clinton has rejected the president's push for massive, multinational free-trade agreements.

That call for renewed focus on alliances extends to NATO, which U.S. officials have said stands at an "inflection point" away from its post-Sept. 11 focus on the mission in Afghanistan to an era with more diffuse and varied threats.

Leaders in Warsaw for meetings on Friday and Saturday will announce efforts to deter what they see as continued aggression from Moscow. They'll discuss increasing NATO involvement in countering the threat posed by the Islamic State group in Syria, and the migration crisis also sparked the Middle East and North Africa. NATO to discuss ways to improve its on cyberwarfare.

Obama will meet Friday with NATO Secretary-General Jens Stoltenberg to review the agenda before visiting with the summit's host, Polish President Andrzej Duda.