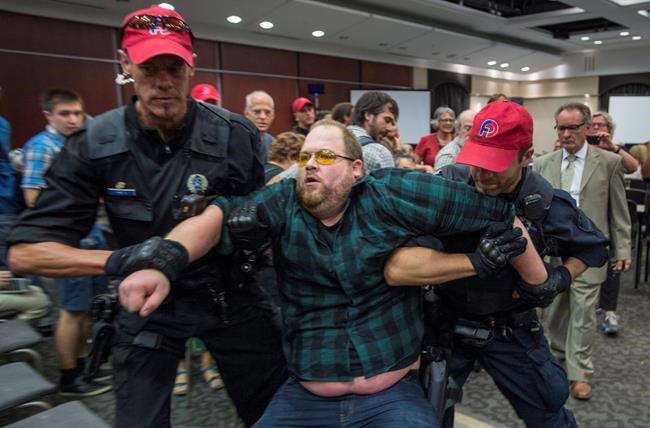 MONTREAL — Protesters forced the cancellation on Monday of the first day of hearings in Montreal into TransCanada's Energy East Pipeline project with police making three arrests.

And the National Energy Board said in a statement that it was also postponing Tuesday's session because of the "violent disruption" that it said "threatened the security of everyone involved in the panel session."

The board said it would release details Tuesday on the next meeting in Montreal.

On Monday, one man charged at the three NEB commissioners seated at the front of the room minutes before the hearings were set to begin. He was grabbed by security officers, allowing the commissioners some time to leave.

"TransCanada will not pass," he screamed as police dragged him away from the downtown conference room.

Police originally said the 44-year-old was also charged with assault.

Montreal Mayor Denis Coderre, along with the mayor of nearby Laval and other municipal representatives, walked out of the hearings not long after the demonstrators charged in.

Coderre was the first person scheduled to give testimony Monday but chose instead to leave, calling the protests a "masquerade."

He and many provincial politicians and First Nations groups oppose TransCanada's project to transport crude oil from Alberta to New Brunswick.

"There are too many problems we are witnessing to accept the project," Coderre told reporters after he decided to leave the hearings.

"We're saying the project (TransCanada) presented is wrong, it's bad and we don't have the answers. And frankly one of the main issues is contingency plans, everything regarding safety."

Coderre asked last week for the hearings to be suspended after media reports revealed that two of the three NEB commissioners overseeing the review process met former Quebec premier Jean Charest, who was at the time a lobbyist for TransCanada (TSX:TRP).

He said he wasn't calling for the commissioners to resign, but that there was a perception of bias.

Nonetheless, Coderre said it was important for him to give testimony in order for the NEB and the rest of the country to appreciate the concerns of local citizens.

"Whatever their point of view might be, we think they should all have a right to say it," Carr said in Edmonton. "And if there were circumstances that didn't allow people to speak on a very important national subject, I'm sorry about that."

Monday was not the first time protesters sought to disrupt environmental hearings into the pipeline project. In March, protesters began chanting as soon as Louis Bergeron, Energy East’s vice-president for New Brunswick and Quebec, began speaking.

That disruption lasted only about 15 minutes.

Monday's protests were not exclusively anti-pipeline. Members of a large construction union holding signs in support of Energy East outnumbered anti-oil activists outside the conference centre.

"I'm convinced that moving oil by pipeline is more safe than transporting it by train or tanker," said union member Sylvain Morissette. "In Quebec, we had bad experiences with oil transport by rail."

One of the anti-pipeline protesters, Kristian Gareau, said the entire NEB process is illegitimate because two of the commissioners had met with Charest.

"There is a perception of bias," said Gareau, 36. "These two commissioners are part of this democratic institution, which has the sweeping power of a federal court.

"So a judge cannot go and meet with people in a backroom. It just shows this smug elite privilege which is completely unacceptable."

The hearings were set for this week in Montreal before moving to Quebec City the week of Oct. 3.