Teachers, kids head back to school to teach each other, learn together 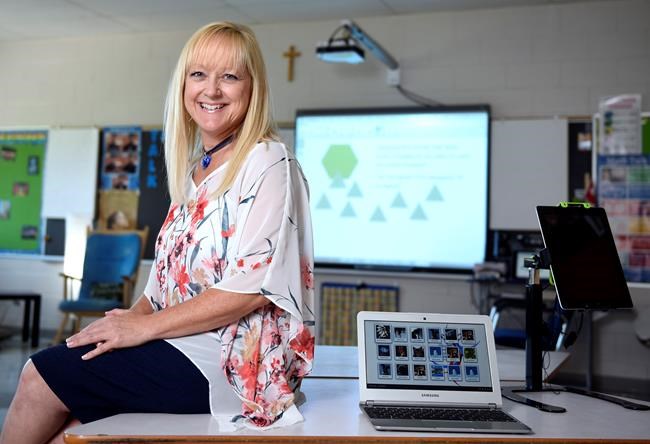 TORONTO — After spending 25 years in the classroom, Ontario schoolteacher Tammy Doyle no longer considers herself an educator. She calls herself a "learning partner."

The shift in perspective is a big part of how Doyle embraces her role in a system-wide overhaul at the Ottawa Catholic School Board, which is meant to give students "a voice and a choice."

"We want to stop having education delivered and make them the creators of their education," Doyle says of efforts to build a more collaborative classroom with the help of technology.

"I think it's incredible if we can empower our students for tomorrow — not looking back to yesterday or even today but giving them a digital voice that can potentially be heard all over the world.... That's the definition of empowerment and innovation and it all begins with that simple shifting mindset."

The mindset is a fusion of buzzy pedagogical trends including project-based learning, inquiry learning, blended learning, and flipped classrooms.

It's all supported at St. Thomas More elementary school by plenty of technology, with laptops for every teacher, an open and robust Wi-Fi network, a bring-your-own-device policy for students, and plenty of Chromebooks and tablets for those who need to borrow one at school.

It's a dramatic leap from five years ago, when teachers relied on overhead projectors to explain the day's lessons.

These days, they also use digital whiteboards and video cameras — and in Doyle's Grade 1 class, a brand-new 3D printer. Meanwhile, students preview material online at home before school, choose whether they'd like to sit, stand or lounge on pillows during class, and might even decide to skip the lesson altogether in favour of a different topic in the next room.

Experiments like these certainly aren't new or unique, acknowledges the board's director of education Denise Andre, pointing to pockets of innovation across the country, often at the school level.

But she says it's relatively rare to see such initiatives rolled out system-wide, as they are in her 84 schools.

"We've had a number of other school boards come to visit us, a school board in Montreal came to visit our district and we've been asked to present at different conferences," she says, noting they're also part of a case study by education expert Michael Fullan involving two other districts that also managed whole-system reform, as well as another study by the Canadian Education Association.

The revamp involved steep investments in infrastructure and training, but Andre says it has paid off with rewarding classroom discussions that might involve Skyping to kids in Mexico to talk about environmental initiatives or using Facetime to connect with a game designer.

The board, meanwhile, is keen to connect with a broader movement to rethink how students best learn.

Andre says it's entering its third year as part of the global study New Pedagogies for Deep Learning, which involves 100 school districts in 10 countries in a collaborative push to reshape education.

Annie Kidder of the advocacy group People For Education is a fan of inquiry-based learning and is buoyed to see educators recognize the value of less tangible qualities like creativity and social and emotional learning — she'd like to see governments measure such qualities beyond the traditional "three Rs". But she's wary of theories that purport to be the next big thing.

"We definitely have to be careful about the 'in' thing or the flavour-of-the-month, which does happen in education a lot," says Kidder, deriding the recent "grit" movement, which urged educators to teach kids character strengths like grit and resilience.

"The danger is the pendulum goes far, far, far in another direction. It's always a combination of understanding what real information is so that when you're learning you're looking at everything with a critical eye, you're thinking about it deeply."

A willingness to try new things is ingrained in today's young teachers entering the field, says Richard Messina of the Ontario Institute for Studies in Education.

"They're recognizing that the more conventional approach ... delivering the same message to every child and hoping it sticks with some of them, that that's unacceptable now," says Messina, principal at OISE's laboratory school where student teachers hone their skills with children in the classroom.

At his laboratory school, kids are assessed and challenged based on their cognitive development rather than age, meaning an eight-year-old who only understands Grade 2 math but reads at a Grade 4 level would have assignments that vary widely in difficulty.

"This way of teaching is messier because people are complicated, children are different, but it's incredibly rewarding," he says.

Doyle says students are happiest when invited to help shape their curriculum, which they do in her class by suggesting topics on an online bulletin board.

There's a bit of chaos as up to 80 six-year-olds wander in and out of four Grade 1 classrooms, she admits, but she says they're excited and interested in learning: "We just don't have those discipline issues in this environment."

"It's unlike education that we ever had and experienced, the kids are going home excited and talking about it," she says.