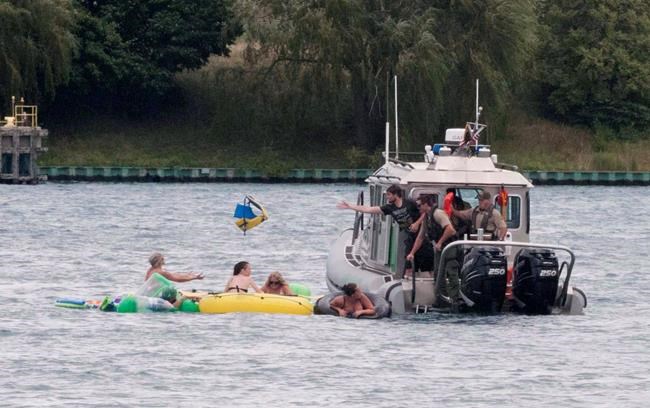 The image of hundreds of Americans on inflatable rafts and makeshift platforms bobbing helplessly down the St. Clair River as strong winds pushed them towards the Canadian shore is one Peter Garapick isn't going to forget.

The Canadian Coast Guard superintendent of search and rescue was on the water near Sarnia, Ont., when the festive air of the unsanctioned Port Huron Float Down turned tense as participants realized they were drifting towards a foreign country without their passports, cash or much clothing.

Now, just two weeks after some 1,500 stranded Americans were rescued, corralled and shuttled home, Canadian and U.S. authorities have met to discuss how they'll prepare for next year's event.

"I'm very proud of the multi-agency response in Canada and the States, we worked very well together," said Garapick. "But we will engage and start the conversation with people who think they're going to consider this and say, you know, start talking safety."

Authorities on both sides of the border have committed to work on a co-ordinated response for future events, and a plan to encourage safety and common sense on the water, Garapick said.

The Float Down, which has been running on and off since the late 1970s, is "inherently dangerous," but nonetheless continues to attract participants looking for a party down the river between Michigan and Ontario, Garapick said.

This year's event, however, stood out for the sheer number of people who had to be helped by coast guard, border services and police after high winds blew floaters clear across the border on Aug. 21.

"We knew by nine that morning it was going to be a challenge," Garapick said. "We knew everybody was going to come our way, but it was sunny, the weather was half decent and the folks who do this are not boaters, they are not mariners and they don't think about that."

As participants were pushed towards Canada, a number of them panicked — many looked about in dismay as the floats they were on jammed together, creating a crush of inflatable devices. Others jumped into the rising waves and struck out for the U.S.

"This is where people die, they think they can make it," said Garapick. "We actually forced people back on their floats."

Garapick remembers pulling a woman who was four months pregnant from the water, watching in dismay as someone tried to swim back to the American side, and dealing with people who claimed they were having cardiac and other medical problems on the water.

The entire situation was "potentially catastrophic."

Authorities eventually used loudspeakers to tell people they were allowed on Canadian soil and instructed them to make landfall so they could be transported back to the U.S.

"A lot of people may have never left America before and now here they are going to a foreign country without any ID," said Garapick. "There were still people who were nervous."

The revellers — who left pool toys, alcohol and other debris in their wake — were eventually taken back to the U.S., all without any major incidents, said Garapick, noting, however, that the efficient response of authorities could encourage participants next year.

"Unfortunately, the organizers of the event think 'no one died, that proves that we can do this and proves that they'll be there to help us.' That's very frustrating, because if we didn't respond the way we did, all the agencies together...there would have been a lot of casualties."