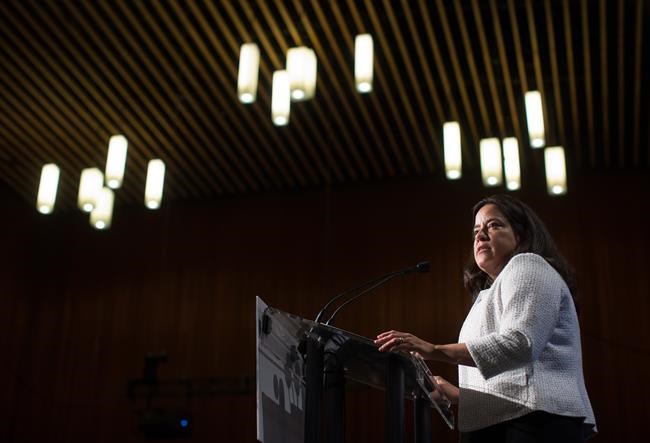 VANCOUVER — Canada must adopt the United Nations Declaration on the Rights of Indigenous Peoples in a way that translates into real change for its aboriginal citizens, federal Justice Minister Jody Wilson-Raybould says.

She told an annual gathering of British Columbia cabinet ministers and First Nations leaders on Wednesday that it's important to appreciate why Canada cannot simply incorporate the declaration "word for word" into law.

"The hard and sometimes painful truth is that many of our current realities do not align with the standards of the United Nations declaration, and as such they must be systemically and coherently dismantled," she said.

The declaration spells out minimum standards for the rights of aboriginal people, including a key article that enshrines the right to self-determination and the right to lands, territories and natural resources that they traditionally owned or occupied.

Canada officially removed its objector status to the document in May, almost a decade after it was embraced by the United Nations.

The justice minister faced criticism earlier this summer after telling an Assembly of First Nations meeting that her government would not directly adopt the declaration into law, but would instead consult with aboriginal groups on how to implement each of the 46 articles.

Speaking to a receptive crowd on Wednesday, Wilson-Raybould — a former B.C. Assembly of First Nations regional chief — laid out her case for a made-in-Canada approach.

She said the declaration itself says that it can be implemented in many ways, and further, the federal government does not have jurisdiction to unilaterally address all the minimum standards and principles set out in the document.

Every party needs the time to develop practical approaches to issues such as the concept of free, prior and informed consent, she said, adding that when it comes to resource development, land title issues must be addressed.

She also said the implementation must take into account constitutional and legal contexts in Canada and the government must identify which laws, policies and practices need to be amended or introduced.

Wilson-Raybould said she was inspired by a conversation with a Maori leader during a recent trip to New Zealand. The woman told her that adopting the UN declaration was meaningless if it did not result in real change.

"She basically told our delegation that in her opinion, rights are essentially nothing if you do not have the will or the power to act on them," Wilson-Raybould recalled.

Premier Christy Clark, her cabinet and representatives of about 200 First Nations attended the third annual gathering in Vancouver. The province called it the largest event of its kind in Canada, with more than 300 meetings scheduled over three days.

Clark acknowledged in her speech that "difficult conversations" had taken place, but she said the hard work was crucial on the path to reconciliation.

The premier said she would visit the Cheslatta Carrier Nation in north-central B.C. next week to acknowledge the harm caused by the Kenney Dam. The territory was flooded after the dam was built in 1952, forcing its residents to flee and destroying grave sites.

"I want to take a moment to remember how difficult it is to set aside long-held, legitimately founded grievances and decide instead to work toward resolving them," Clark said.

Earlier Wednesday, Grand Chief Stewart Phillip of the Union of B.C. Indian Chiefs berated the provincial government for proceeding with the Site C dam in northeast B.C. despite the opposition of local First Nations.

Phillip said that as he listened to Aboriginal Relations Minister John Rustad's speech, he started to think about relationships.

"If it takes that long to describe and explain why a relationship is working, and how great it is, I would suggest to you that it's not working," Phillip said.

Rustad said in an interview that there's no question Site C will have "unmitigable impacts" on local First Nations.

"We recognize that, we have spent many decades talking with the nations about that, but we also recognize the needs of all British Columbians," he said. "As government, sometimes you have to make those tough choices."