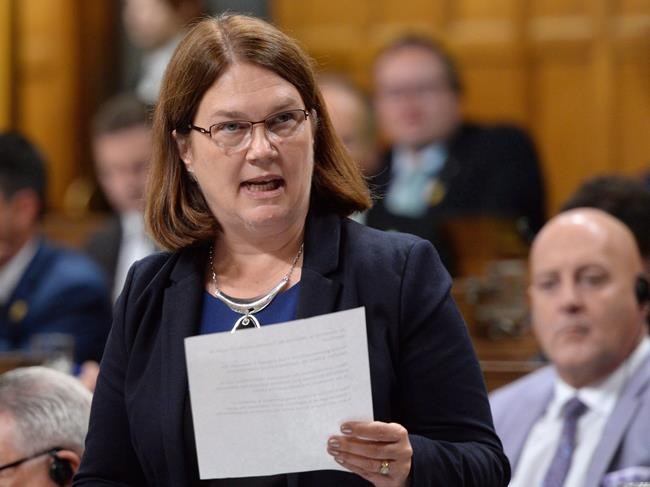 Ottawa has to be sure it's getting the most for its money when it comes to health transfer payments, a frank-talking Philpott told a news conference at the same Toronto hotel where her regional counterparts were meeting separately.

Officials say federal health expenditures totalled $41.3 billion in 2015-16, with transfer payments accounting for $34 billion of that.

"My ears are open," said Philpott, who sits down with provincial and territorial health ministers on Tuesday. "If they have great ideas about how they want to improve systems ... I am open to listening to that. "

At one point, Philpott sounded exasperated as she talked about having asked the ministers way back in January for their ideas on how to improve services in areas such as mental health.

"I said to them months ago, 'How would you like to deliver better mental health care for Canadians?'" she said.

"I need to hear how they want to do that before I can consider where there can be further investments. If we are going to make more investments, they need to go to health."

Philpott's comments, combined with provincial intransigence about the idea of diminishing transfer payment increases, have set the stage for a spirited discussion when the two sides sit down to hash out their differences.

Clear battle lines have been drawn.

The provinces and territories are opposed to the government's proposal that transfer payments increase by just three per cent a year, down from the six-per-cent increase set out in the last health accord, established in 2004.

Ontario Health Minister Eric Hoskins, who is hosting this week's meetings, said the issue of health transfers needs to be negotiated by the senior players on the federal-provincial file, namely the premiers and Prime Minister Justin Trudeau.

"It may be that it is not (Philpott's) decision to make," Hoskins said during a joint news conference.

"Time is running out. I think that's the other anxiety we have where decisions have to be made at the provincial and territorial level for next year's budgets."

A meeting with the premiers and Trudeau is set for later this year, though that meeting is expected to be dominated by climate change — another irritant in the often-fraught relationship between Ottawa and the provinces and territories.

Hoskins, himself a member of a Liberal government, made it clear that a three-per-cent increase would be a "huge blow" for the provinces: a $400-million shortfall in Ontario alone in 2017-18 and $1 billion across the country.

Quebec Health Minister Gaetan Barrette, one of the most outspoken provincial ministers on the issue of federal transfers, said the change would most certainly mean diminished services for patients.

B.C. Health Minister Terry Lake has acknowledged there cannot be unbridled spending on health, but said he remains strongly opposed to what the federal Liberals have on offer, considering the persistently upward trajectory of health costs and mounting pressures from demographic factors, like the aging population.

"This is a series of discussions," Lake said. "I think we set the table here ... we want to have a good relationship."

Finance ministers from B.C., Ontario and Quebec also attended Monday's discussions while others listened in over the phone.

For her part, Philpott has been adamant that health ministers need to review how to make the current health-care system more effective, citing Ottawa's plans to invest $3 billion over four years in home care, including palliative care.

"We have not managed to do that and I am determined to work with my colleagues to improve the system."

One player put forward an outside-the-box idea Monday, but it came from a source Philpott may not be keen to acknowledge: Conservative MP and leadership hopeful Maxime Bernier.

At a news conference on Parliament Hill, Bernier proposed ending the use of health transfers, instead replacing them with tax points of equivalent value and giving the provinces and territories complete authority over administering and funding health care services.

"I can make one prediction: This week's meeting in Toronto is not going to solve anything," Bernier said in a statement.

"What we are going to see is a bunch of bickering politicians failing their primary responsibility, which is to find more efficient ways to offer first-class health care services to all Canadians."