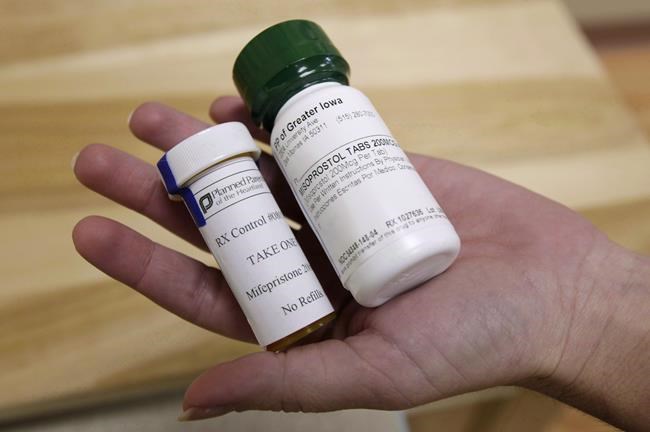 TORONTO — Sexual health advocates are intent on making Canada the most permissive country in the world for a heavily regulated abortion pill expected to hit shelves next month.

Mifegymiso has been available elsewhere for nearly 30 years and is approved for use in more than 60 countries with varying restrictions.

In some cases, that includes the demand that only a doctor be allowed to hand the drug to the patient — rather than a pharmacist — and that the woman swallow the pill at a clinic in front of her physician, instead of privately in the comfort of her own home.

It appeared similar restrictions were imposed when Health Canada approved the drug, but ongoing pressure seems to be loosening several key conditions as its expected November debut approaches.

The federal regulator issued a clarification last week stressing that a woman does not need to ingest the drug in front of a doctor at a clinic, as is required in the United Kingdom, France, the Netherlands and Sweden.

Meanwhile, a call-to-action led by the B.C. doctors and advocacy groups including the Ottawa-based Action Canada for Sexual Health & Rights is hammering away at other perceived hurdles to accessibility: including its $300 cost, certification requirements for the prescribing doctors, and limiting use to no more than seven weeks after a woman's last period.

"Why should abortion medication be subject to that scrutiny? It shouldn't be," executive director Sandeep Prasad said of the myriad restrictions on the drug, also known as RU-486.

"It's only the case because it is abortion that we're talking about and people have problems with that, people are against it and that's really the issue. It's a stigmatized service and that's really unfortunate."

A spokesman for Health Canada said guidelines are based on data provided by the drug's Canadian distributor, Celopharma Inc., and cannot be changed without a revised submission from the company.

For its part, Celopharma said it's working on a revision that would increase the drug's recommended use to nine weeks after a woman's last menstrual period. The United States currently permits use up to 10 weeks.

It also expressed intent to let pharmacists handle the drug themselves.

"Mifegymiso should be treated like any other medication in so far as dispensing directly to the patient," president Paula Tenenbaum said by email. "Pharmacy dispensing allows for greater minimization of risks, diminishes the gap between rural and urban access."

The company said it's also including an explicit reference to the possibility of telemedicine as an option for medical supervision, since access to abortion services in rural and remote areas has been especially contentious.

"It's not perfect, but it's a step in the right direction," said Tenenbaum.

She said the company expects to submit the application "later this month or early next month" but that Health Canada has 300 days to review the changes.

Mifegymiso, which was approved by Health Canada on July 29, 2015, is a combination of two drugs taken on separate days.

Mifepristone is taken first to block the hormone progesterone, which helps prepare the lining of the uterus for pregnancy. This causes the lining to break down and shed. Then it's followed 24 to 48 hours later by misoprostol, which causes the uterus to contract and expel the pregnancy.

Outspoken critic Dr. Wendy Norman traced the hard-line approach to the drug back to France, 28 years ago, when concerns surrounded its safety and potential adverse reactions. But she said more is known about the drug today, while a pharmacist's role has increased significantly in health-care teams.

"I think there was no consideration for how things have advanced in that last 25 years and how important dispensing safety is now," said Norman.

The Vancouver doctor also expressed concern over the ability of women in rural and remote communities to access the drug.

"If your own family doctor could do this as a reasonable addition to their practice and your own pharmacist and your own town could dispense it, that saves you having to leave your kids and leave your job and travel hours away to get to the big city centre for a normal reproductive health service," she said.

Health Canada said it won't stand in the way of the B.C. college's decision to allow pharmacists to dispense directly to patients, acknowledging that it's the provincial licensing bodies that regulate the practice of doctors and pharmacists.

Prasad said there are still outstanding issues, noting he'd like to see the gestational limit expanded to 10 weeks from the current seven.

"By the time someone's discovering that they are pregnant — trying to decide what to do about that and then seeking appropriate services and surmounting many barriers that exist in Canada to accessing abortion services — those three weeks make a lot of difference," said Prasad, adding that only one in six Canadian hospitals provide abortion services.

The other issue is the drug's "considerable cost."

"Unless a person has access to the drug on a provincial formulary or they have access to drug benefits through their work they're not going to have access," he said, adding that about a third of the population is not covered by either plan.

"We see that as unjust and that will simply compel individuals in that group who are experiencing unwanted pregnancy to opt for a surgical abortion."

However, provincial coverage is also being examined, said the independent, not-for-profit organization responsible for providing health-care players with evidence to help make decisions.

The Canadian Agency for Drugs and Technologies in Health said it is currently reviewing a submission from Celopharma to its common drug review, which advises every province except Quebec on which drugs to cover in provincial drug plans. The review typically takes up to six months.