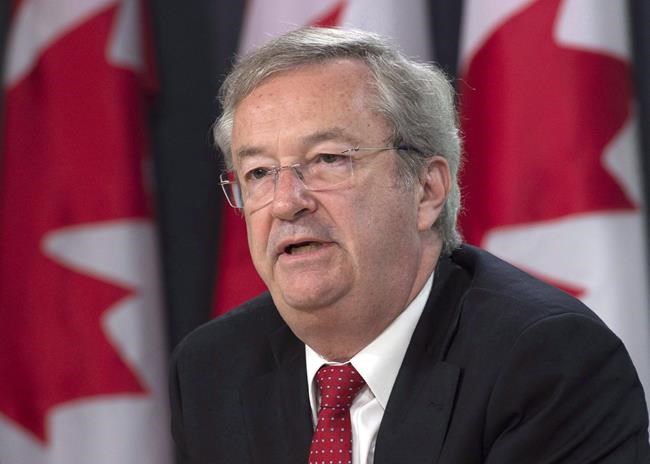 OTTAWA — Canada's chief electoral officer warns that time is running out to organize a national referendum on electoral reform if the voting system is to be changed in time for the next federal election in October 2019, as Prime Minister Justin Trudeau has promised.

And that's if a straightforward referendum question is asked, requiring a simple Yes or No answer.

Marc Mayrand doubts there'd be enough time to organize a more complicated referendum that gives Canadians multiple voting systems to choose from and asks them to rank their preferences — as was done in Prince Edward Island's recent plebiscite on electoral reform.

"Administratively, I must say it would be difficult. Let's be very clear on that," Mayrand said in an interview marking the imminent end of his 10-year tenure at the helm of Elections Canada.

"We don't have the technology in place to manage a ranked ballot. A ranked ballot requires technology to compute the results. By hand, you'll be at it for a long, long time."

Mayrand's warning comes as an all-party committee is expected to recommend holding a referendum to determine how — or if — Canadians want to change the current first-past-the-post voting system. The committee, which has been exploring alternative voting systems, is scheduled to issue its report on Thursday.

Nor is it expected to spell out the details of the recommended referendum.

NDP democratic reform critic Nathan Cullen, who is credited with breaking an impasse at the committee by dropping his party's opposition to a referendum, has said he would prefer following the P.E.I. model.

But while a ranked ballot was possible on the Island, with its tiny population, Mayrand said: "It would be a daunting challenge at the federal level to do it in such a short time."

Cullen acknowledged Mayrand's concerns but said in an interview that it "wouldn't be the end of the world" if it took a week or so to count ranked referendum ballots by hand. Unlike an election, where Canadians expect to know the results within hours, he doubted many would object to a delay in finding out the winning voting system.

In a ranked ballot, if no option receives majority support, the option with the least support is dropped and its supporters' second ranked choices are counted and so on until one option emerges with more than 50 per cent of the vote.

In P.E.I., a form of proportional representation called mixed member proportional emerged as the winner after four rounds of voting on a ranked ballot that offered Islanders five different options.

Federal Democratic Institutions Minister Maryam Monsef has repeatedly said she doesn't like the idea of a referendum, citing the expense and potential divisiveness. But if the committee recommends a referendum, she's said she'll have to take that seriously.

Monsef has also repeatedly said she sees no consensus among Canadians in favour of a specific voting system and she won't proceed with reform without broad consensus.

According to Mayrand, Elections Canada needs at least six months to organize a national referendum. And it needs at least two years to adjust to a new voting system if it's to be implemented by October 2019. Ideally then, if there is a referendum, it should take place before the summer.

"There's still time to have it before the summer," he said. "Time is running out."

Complicating matters, outdated legislation governing national referendums would likely have to be amended to, if nothing else, adopt the strict spending and donation limits that now apply to political parties. The 25-year-old Referendum Act allows for multiple questions but requires that they be subject to simple Yes or No answers; there is no provision for ranking multiple options on a preferential ballot.

While the Trudeau government's commitment to electoral reform is dubious, Monsef last week followed through on other campaign promises to repeal some of the most controversial provisions of the previous Conservative government's Fair Elections Act that she said erected unnecessary barriers to voting. Among other things, her new bill would restore the use of voter information cards as a valid piece of identification at polling stations.

Mayrand had stoutly opposed the Tories' measures, arguing that they could disenfranchise up to 500,000 voters. For his pains, he was vilified by Conservatives as biased and motivated by a desire to pad his budget and his power — an unprecedented attack on an independent officer of Parliament.

Mayrand said he never "dreamed nor had a nightmare" that he'd be subjected to such personal attacks for doing his job to protect the integrity of Canada's elections. And he found the assault on Elections Canada's internationally renowned reputation as an independent watchdog "saddening."

"I found it was unfortunate but, again, I had to accept that it comes with the territory."

In the United States, president-elect Donald Trump similarly alleged that the electoral process was "rigged" against him. Mayrand said such allegations aren't unusual in "the intensity of a campaign" and people don't generally take them seriously.

Still, he said: "We need to be careful because public trust is something that is fragile and we need to cultivate it."