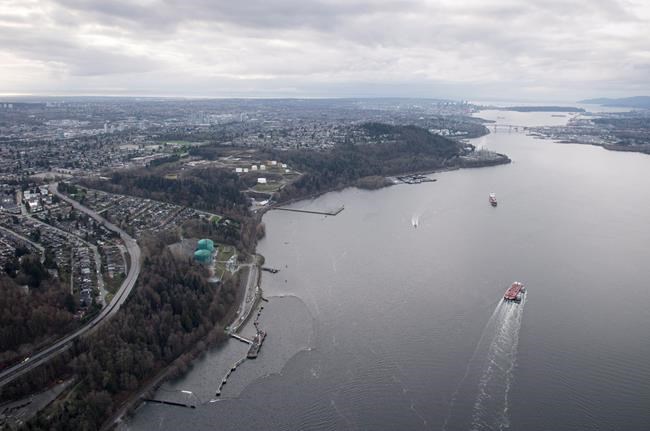 "We are under no illusions that the decision we made today will be bitterly disputed by a number of people across the country who would rather we had made another decision," Trudeau — flanked by a number of his senior cabinet ministers — told a news conference in Ottawa.

"We took this decision today because we believe it is in the best interests of Canada and Canadians."

The Liberals have been setting the stage for pipeline approvals for months, highlighting environmental policy moves like a national carbon price while making the case that the jobs, economic boost and government revenues from fossil fuel exports are critical to the transformation to a low-carbon future.

It's been a tough sell.

Kinder Morgan's Trans Mountain expansion has become a lightning rod for climate protests from coast to coast, with opponents from among Trudeau's own caucus of Liberal MPs and his political ally, Vancouver Mayor Gregor Robertson.

The fight overshadowed quieter deliberations about Enbridge's proposed replacement of Line 3, a half-century-old pipeline from Alberta to the United States that Trudeau approved Tuesday, effectively doubling its current working capacity.

Between the Trans Mountain and Line 3 expansions, the Liberals have approved the export of almost a million additional barrels of oil per day — and the production of between 23 and 28 million tonnes of additional greenhouse gases annually. Line 3 can actually handle another 155 million barrels per day, but Enbridge would have to apply for a new permit.

The Liberals hoped to leaven those numbers with Tuesday's decision to permanently shelve the stalled Northern Gateway pipeline across northwestern B.C. and impose a promised oil tanker ban on the northwest Pacific coast.

But the prime minister also left the door open to more pipeline approvals, saying each project would be examined on its merits.

The "vital element," said Trudeau, is the climate leadership of Alberta's NDP government, which has imposed a 100-million-tonne cap on emission increases from the oil patch.

Trudeau said the Kinder Morgan approval, which includes 157 binding conditions set out by the National Energy Board, would create 15,000 new middle-class jobs.

"And as long as Kinder Morgan respects the stringent conditions put forward by the National Energy Board, this project will get built — because it's in the national interest of Canadians, because we need to get our resources to market in safe, responsible ways, and that is exactly what we're going to do," he said.

Conservatives, however, immediately accused the government of providing less than half a loaf.

Interim Leader Rona Ambrose said the Liberals should have left Northern Gateway "on the table" and must now actively promote the other approved lines, particularly the beleaguered Trans Mountain expansion.

"I see very little prospect, politically speaking, that this pipeline will get built," Ambrose said.

Alberta's NDP premier Rachel Notley, who met Trudeau following the announcement, lauded the prime minister for his "extraordinary leadership" — crediting the Liberals for building the economy and moving forward aggressively on the environment while "understanding that you can do both at the same time."

Notley called the Kinder Morgan approval "very good news for Albertans" at a difficult time for the province.

"It means that we can diversify our market, we can get our product to China and we can get more money for our product and we can enhance our economic independence not only in Alberta but all of Canada," she said.

"He still doesn't even have a plan to deal with greenhouse gases after the Paris conference," Mulcair said. "So, there's no excuse for what he's doing here today."

Climate advocates such as Patrick DeRochie of Environmental Defence said the approvals raise "grave doubts" Canada can meet its international 2030 climate goals, and that much deeper emissions cuts will have to be made elsewhere in the Canadian economy.

Many indigenous leaders, with whom the Liberals have promised a new nation-to-nation relationship, were scathing.

There are no conditions under which the chiefs would have been willing to agree to the project, Phillip added.

"The risks are just too grave. The tanker traffic in Burrard Inlet will increase by 700 per cent and it's inevitable that there will be a collision in a very congested inlet."

Trudeau made a point of saying overall ship traffic in the inlet would increase by only 13 per cent, but critics said the government clearly lacks community approval for the decisions.

"He doesn't have social license," cracked the NDP's Mulcair. "Heck, he doesn't ever have a learner's permit."

Earlier Tuesday, the broad strokes of a year-long Liberal government effort to position the government between fossil fuel development advocates, indigenous groups and climate policy hawks played out during question period in the House of Commons.

Ambrose challenged Trudeau that it is not enough for the government to approve major pipelines; it must then "champion them through to the end" in order to see that they actually get built.

Mulcair, by contrast, accused the Liberals of a "Goldilocks approach" that has browbeat the Liberal party's own environmentally conscious, anti-pipeline MPs into silence.

Trudeau was happy to claim the middle ground.

"One side of this House wants us to approve everything and ignore indigenous communities and environmental responsibilities," he said.

"The other side of the House doesn't care about the jobs or the economic growth that comes with getting our resources to market."

The pipeline decisions follow weeks of Liberal government announcements designed to show it is serious about combating climate change, including an accelerated coal phase-out, a national floor price on carbon emissions starting in 2018 and $1.5 billion for ocean protection and spill clean-ups.

Trudeau confirmed Tuesday that he'll be holding a first ministers meeting with provincial and territorial premiers as well as indigenous leaders on Dec. 9 in Ottawa, where the pan-Canadian climate plan will be the main focus of the agenda.

U.S. Vice-President Joe Biden will also be making a visit to Ottawa on Dec. 8-9 to meet with the first ministers — perhaps one last opportunity for the Liberals to showcase their environmental policy entente with outgoing President Barack Obama before president-elect Donald Trump's inauguration in January.