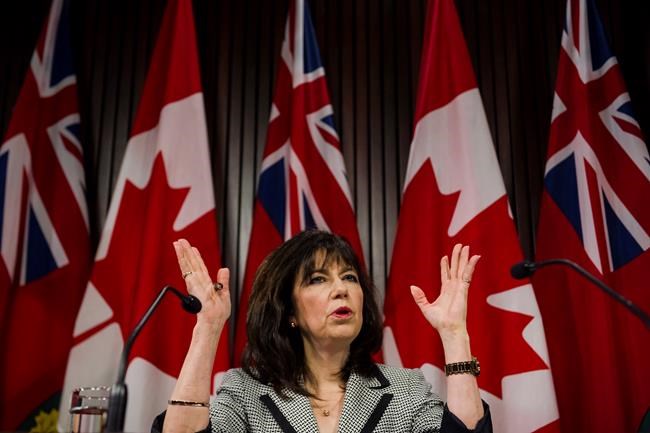 TORONTO — Ontario's government watchdog says taxpayers spend millions of dollars paying repair bills for shoddy work by contractors hired for road maintenance and public transit projects, including part of one bridge that was installed upside down.

Auditor General Bonnie Lysyk also warns of serious shortcomings in the health-care system, and predicts cap-and-trade will cost businesses and individuals $8 billion between 2017 and 2020 but won't meet the emissions reduction target.

In her annual report, Lysyk said pavement on some Ontario roads and highways that is supposed to last 10 to 15 years starts to crack after just two or three.

"For a sample of five highway jobs...we calculated that the ministry paid $23 million for repairs after one-to-three years, on top of the $143 million to initially pave these highways that should have lasted 15 years," reported Lysyk.

Contractors were "tampering with asphalt samples" so they could obtain part of the $8.8 million the ministry paid in bonuses to include the quality of asphalt they "are always expected to do anyway," added Lysyk.

The ministry agreed to a request from asphalt producers and cement suppliers to delay plans to implement a second aging test to identify asphalt that is likely to start breaking up before it should.

Transportation Minister Steven Del Duca said he was "not happy" to see the report, and promised an "extended aging" test for asphalt would be included in all road maintenance contracts by next year. But Del Duca wasn't pinning as much of the blame on shoddy work as the auditor general did.

"There was an understanding that asphalt in some cases wasn't performing as it should," he said. "We have a unique climate in Ontario, and that factored into the discussions, some of the research and analysis."

The province spent about $6.1 billion on 2,100 highway projects over five years, with $1.4 billion of that going to road paving. The auditor found the Ministry of Transportation allowed the Ontario Road Builders' Association "to influence its internal operational policies to benefit contractors rather than the ministry."

Lysyk said Metrolinx doesn't hold contractors and design consultants accountable for projects that are late or inadequate, and like the ministry of transportation, still awards new work to contractors that performed poorly in the past.

"The lack of a process to hold construction contractors accountable contributes to projects being completed late, inconveniences commuters and adds extra costs for Metrolinx and taxpayers," said Lysyk.

Metrolinx is now responsible for $1 in every $7 dollars of government capital spending, but the auditor found the agency often doesn't know if it's getting what it pays for. CN admitted it charged Metrolinx for new rail when it actually provided recycled rail.

One contractor working on a pedestrian bridge over Highway 401 in Pickering was so bad Metrolinx had to take over its duties, but then hired the same contractor, who caused "significant damage" to the bridge in phase two. The contractor then installed one of the bridge trusses upside down, but was still paid $19 million.

Lysyk's report also takes the Liberals to task for growing wait times in emergency rooms, and said waits for elective surgeries at Ontario's largest hospitals have not improved in five years, but surgical suites are sitting empty a lot of the time.

"Many hospitals are closing most of them on evenings, weekends, statutory holidays, March break and for two to 10 weeks during the summer," she said.

The auditor also found the Ministry of Health does not investigate inappropriate or anomalous billings by doctors even though it spends $11.6 billion a year for physician compensation. Nine specialists claimed to work over 360 days in fiscal 2015/16, with six of them billing for the full 366 days.

"Since the beginning of 2013, the ministry has nor proactively pursued recovery of overpayments," said Lysyk.

Health Minister Eric Hoskins said the government was trying to get back the money over billed by some doctors.

"We need to strengthen our mechanism for identifying them and recouping (the money)," he said.

The auditor said the ministry often ends up paying twice for the same patient when someone who signed up with a Family Health Team visits a walk-in clinic.

"The patient-enrolment payment model the province adopted a decade ago cost $522 million more in 2015 than it would have under the fee-for-service model," she said. "In part, that's because about 1.8 million patients enrolled in group practices did not see their doctors that year, but the physicians were still paid $243 million for having them enrolled."

Lysyk was very critical of the province's services for children and adults with mental health issues.

"Despite a 50-per-cent increase in hospitalization of children and youth with mental health problems since 2008/09, the province has not analyzed the reasons for the increase or taken steps to address it," she said.

The report also notes that Ontario's health-care sector spent $8 billion over the last 14 years to implement electronic health records but still hasn't created them for everyone.