Baloney Meter: did the feds promise electoral reform only with broad support? 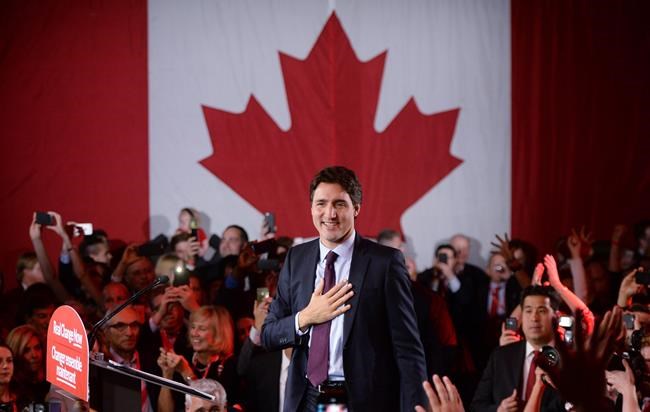 OTTAWA — "We've been very clear from the very beginning, Mr. Speaker, that we will not move forward on reform without the broad support of Canadians." — Democratic Institutions Minister Maryam Monsef, Nov. 28, 2016.

During last year's federal campaign, Justin Trudeau promised that if elected, the Liberals would ensure the 2015 vote was the last in Canada under the so-called "first-past-the-post" electoral system.

The party's platform promised an all-party parliamentary committee that would review a variety of reforms, such as ranked ballots, proportional representation, mandatory voting and online voting.

That committee's recommendations would be delivered to Parliament and legislation to enact reform would be introduced within 18 months of the Liberals forming a government, Trudeau promised.

They formed that government in November; the following month, the electoral-reform promise was enunciated once again, this time by Gov. Gen. David Johnston during the speech from the throne.

But is it true, as Monsef says, that the Liberals have insisted "from the very beginning" on having the "broad support" of Canadians before going ahead?

Spoiler alert: The Canadian Press Baloney Meter is a dispassionate examination of political statements culminating in a ranking of accuracy on a scale of "no baloney" to "full of baloney" (complete methodology below)

This one earns a rating of "full of baloney" — the statement is completely inaccurate.

In May, some six months after forming a government, Monsef said a special committee would be established to examine the question of electoral reform. She later announced that the Liberals would support an NDP proposal to ensure no one party had a majority of seats on the committee.

During a news conference with then-Liberal House leader Dominic LeBlanc, however, Monsef never mentioned the terms "broad support." The committee would be able to address the public interest through its own consultations, she said.

That same month, Monsef appeared to change her position: in an interview with the Toronto Star, she signalled the Liberals would abandon plans to overhaul the electoral system without widespread public support.

"We will not proceed with any changes without the broad buy-in of the people of this country," she said.

In July, Monsef called first-past-the-post an "antiquated system" designed to meet the realities of 19th century Canada. Again, she said, the government would make changes only with the "broad support" of Canadians.

In October, Trudeau made headlines after he suggested in an interview with the Quebec newspaper Le Devoir that Canadians might be less keen on electoral reform now that the Liberals were in power.

And Monsef, who is set to receive the committee's findings today, has been saying lately that she has yet to hear broad consensus on the issue — just the latest example, critics say, of a waning government appetite for electoral reform.

The Liberal message was crystal clear in the beginning, said University of Toronto professor Lawrence Leduc: "2015 was going to be the last election under first-past-the-post — full stop."

The latest comments from Monsef, however, make it clear that for whatever reason, the Liberals are no longer as committed to their unequivocal electoral-reform promise as they were during the election campaign.

As a result, any Liberal claims that they insisted from the outset on first having broad public support are utterly false, said Nathan Cullen, the NDP's democratic reform critic and a vice-chair of the electoral committee.

"At no point in there did he ever put an asterix at the end and say 'Unless, of course, we don't get broad consensus, then 2015 isn't the last election under first-past-the-post.'"

Blake Richards, a Conservative MP who also sits on the special committee, said it is hard to argue the Liberals have been "very clear" on the democratic reform file.

Any broad buy-in from Canadians can only come by way of a referendum, he added — an idea now supported by the NDP but opposed strenuously by the government.

The Liberals have been strategically backing away from their position after forming government and have been doing so ever since, said Leduc, who supports the idea of an electoral system based on proportional representation.

"They were hedging their bets from the get-go," he said. "If you do it gradually over a period or so in little bites, then it looks more plausible."

"If they are reading that there's no consensus and they back down from their position, I am happy," Dutil said. "Until proven otherwise, and I want to see proof our system (first-past-the-post) is not working."

There's little doubt that Monsef's claim of needing broad support was not there from the beginning.

Indeed, the message has evolved into one that may be more sensible and responsible than their bold election promise, said University of British Columbia professor Richard Johnston.

Abolishing an established electoral formula in a single session of Parliament is a stretch, he said, noting Trudeau made the electoral reform pledge in June 2015, when he was trying to steal progressive voters from the NDP.

It is not surprising the government is shifting its position, agreed Peter Russell of the University of Toronto.

"I would call it a sensible thing for a democratically accountable government to do," Russell said. "We're in a democracy and we need some legitimacy, and hence her fudge."

Whatever the government's motives, the minister's statement is full of baloney: the statement is completely inaccurate.