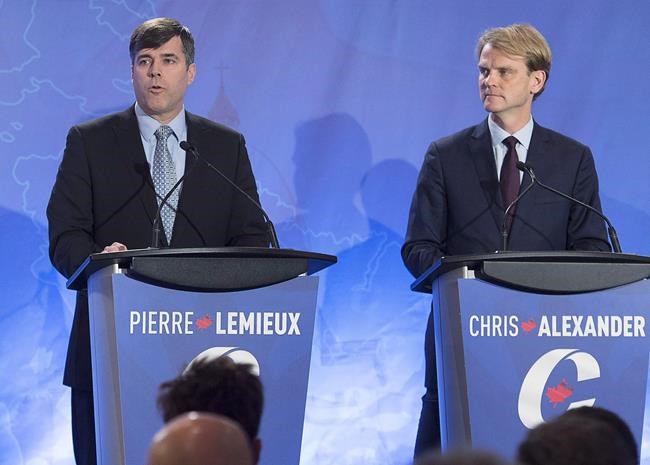 OTTAWA — A pair of Conservative leadership hopefuls say it's time for Canada to have a free and open debate about sex-selective abortion — a position that's raising concerns about the revival of old party divisions.

Pierre Lemieux, a former Ontario Tory MP, promised Sunday that under his leadership the Conservative platform will include a pledge to take action against sex-selective abortion. As prime minister, he vowed he would work to eliminate the practice.

"I believe it is wrong to end a pregnancy based solely on the belief that a baby girl is worth less than a baby boy," Lemieux, one of the lower-profile hopefuls in the 14-candidate race, said in a new campaign video.

"As a father of four daughters, this issue is particularly close to my heart and I stand with those Canadians who have serious concerns about gender-selective abortion...

"I believe that politicians should have the courage to debate these issues in an open and respectful way."

The issue of sex-selective abortion has been a source of controversy within the Conservative ranks in the past.

Lemieux, who lost his seat in last year's election, urged people who believe in a respectful debate on this type of issue to donate to his campaign.

Later Sunday, leadership rival Brad Trost applauded Lemieux for raising an issue that he says the party's membership has voted to condemn. Trost says he's also brought up the matter during the campaign.

"Pierre and I are endorsing party policy and I think the other candidates in the leadership race need to say, do they or do they not, support party policy when it comes to gender-selection abortion?" the veteran Saskatchewan MP said in an interview.

"Others will dodge and try not to answer the question and I don't think that's what real leaders do."

Conservative strategist Michele Austin noted Sunday that while Lemieux's position is consistent with his social-conservative views, she said she thought it was part of a strategy for him to get noticed. She worried his announcement could reopen old wounds within the party.

"I think that a lot of people will be disappointed that he's going to go this hard and this fast on the issue of abortions — this early," said Austin, a senior adviser with Summa Strategies.

"There's a crowded field and everybody's trying to get votes. So, from a strategic point of view we shouldn't be surprised about it, but I think that a lot of Conservatives are going to be disappointed if this hijacks the agenda."

Austin said she believes other leadership candidates support Lemieux and Trost's position. However, so far she said the others have chosen either a "big-tent" approach or to raise the issue in a different way, at a different time.

"The joy under the Rona Ambrose leadership is that there hasn't been any great divides in these kinds of social conservative issues and we've enjoyed this quiet time of rebuilding, where everybody is free to pursue their interests and their own beliefs," she said.

"It's an exciting time to be in the party."

A spokesman for Maxime Bernier's leadership campaign said Sunday that the Quebec MP prefers to keep his personal views on this matter to himself. However, Bernier respects and supports the democratic right of any MP who wishes to raise the issue and to vote on it freely, Maxime Hupe said.

During his time in office, former Conservative prime minister Stephen Harper said that his government did everything it could to avoid reopening the abortion debate.

Some studies have suggested that sex-selective abortion could be an issue in Canada.

In April, research published in the Canadian Medical Association Journal found that Indian-born women in Canada with two or more children had been giving birth to more baby boys than expected. The researchers suggested abortions related to sex selection may have been a major reason.