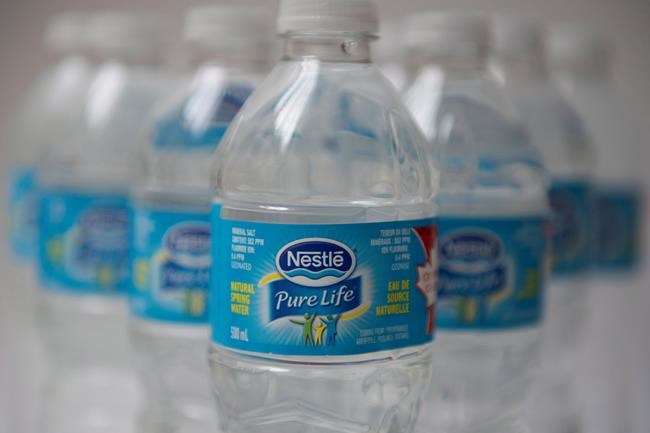 TORONTO — A small Ontario township looking for a drinking water supply isn't sure what to make of a proposal from Nestle to 'partner' on a well the community tried to buy but lost to the international bottled-water giant.

Nestle Waters Canada representatives attended the council meeting in Centre Wellington township Monday to say it wants to partner with the small but fast-growing community near Guelph on the well the company purchased.

"We hope that a partnership concept will be identified that both the township and Nestle Waters can agree upon," said Nestle's natural resources manager Andreanne Simard. "(A) partnership which sees community needs prioritized while also identifying potential revenue streams that contribute to shared and sustainable prosperity."

Centre Wellington Mayor Kelly Linton said he's not really sure exactly what Nestle has in mind at this point.

"They really weren't asking us for anything except to consider a kind of partnership in the future, and they were fairly vague about what that could mean," Linton said in an interview. "We're really just at a starting point after they floated that concept out there. I don't know what it really means."

Ontario imposed a moratorium on new or expanded bottled water operations after Nestle purchased the well in Middlebrook last summer that Centre Wellington had also tried to buy. The moratorium has prevented Nestle from testing the quality and quantity of the water available at the well.

The company said any discussions about a partnership would be protective of the community's needs to safe, reliable drinking water.

Linton said the community is willing to talk with Nestle about its plans while it conducts scientific studies on its future water needs, but insisted it is not engaged in negotiations with the company.

"This was kind of them throwing something out at the council directly to see if there's an opportunity for us to jointly use the well," he said. "We've been really clear that we don't want any other water takings to infringe on our ability to look after our own needs."

Linton said the Ministry of the Environment told the township it needs to "scientifically demonstrate" its future drinking water needs.

"Until we know that, we really can't enter into any kind of serious negotiations about sharing it," he said.

"We have two years right now because of the moratorium and are going to be doing a lot of data modelling to understand how much water we're going to need with our growth rate and where we're going to get that water."

Nestle's offer to partner with the township was probably an attempt to find some way to move forward on developing the Middlebrook site and partly a public relations move, added Linton.

"They're sitting on this well and can't really do anything with it," he said. "They've taken quite a hit on this file and I think they wanted a chance to interact directly with council and give us their story."

Ontario charges $3.71 for every million litres of water taken, on top of a permit fee of $750 for low- or medium-risk water takings, or $3,000 for the 30 per cent of permits considered a high risk to cause an adverse environmental impact.

The public has until the end of January to comment on potential new regulations looking at ways to improve Ontario's renewal process for water-taking permits for bottled water companies — and increasing the fees they pay.