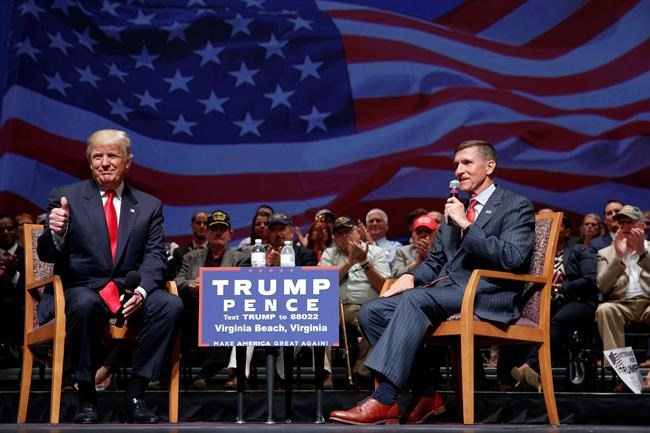 PALM BEACH, Fla. — President-elect Donald Trump is planning to meet with his incoming national security adviser in the aftermath of violence abroad as the process of filling top jobs in his administration presses on. Trump won't be bringing his first campaign chief, Corey Lewandowski, into a White House job, but the combative operative won't be far away.

Lewandowski said Wednesday he would not be joining the administration. He announced plans to start a political consulting firm with offices just a block from the White House, raising the likelihood that he will remain an influential player in Trump's orbit even without a West Wing office.

The president-elect's transition team has said announcements on White House staffing could come as early as Wednesday.

Trump opened his day by boasting anew about his Nov. 8 election victory, tweeting that his win in the Electoral College was more difficult to pull off than winning the popular vote would have been if he had tried. Democrat Hillary Clinton won at least 2.6 million more votes than Trump, an apparent sore point for the president-elect. "I would have done even better in the election, if that is possible, if the winner was based on popular vote - but would campaign differently," he tweeted.

Trump's meeting with retired Lt. Gen. Michael Flynn, his choice for national security adviser, will come a day after Flynn and several other members of the incoming national security team met with Mike Pence in Washington.

Aides said the meeting was planned before the acts of violence In Germany and Turkey, though they were discussed. The Islamic State group has claimed responsibility for the truck attack in Berlin that killed 12 people and injured 48. As well, investigators searched for clues on whether the gunman who assassinated the Russian ambassador to Turkey planned the attack alone.

While Trump has assembled his Cabinet at a quick pace, the process to fill out top White House jobs has been slowed by pushback among some advisers. Some of Trump's earliest advisers have expressed concern to the president-elect himself that they are getting boxed out in of those more closely aligned with incoming chief of staff Reince Priebus, who has chaired the Republican National Committee.

Trump met Tuesday with candidates for his unfilled Cabinet positions, including prospective hires to run the Department of Veterans Affairs, a beleaguered agency that the Republican businessman has vowed to overhaul.

At Mar-a-Lago, Trump's palatial Florida estate, the president-elect met with Luis Quinonez, who runs a company with military and health care ties and is said to be under consideration for VA secretary. He also interviewed Toby Cosgrove, the CEO of the Cleveland Clinic, who was a top contender to replace Eric Shinseki when he resigned from the VA in 2014. Cosgrove later withdrew from consideration.

Trump repeatedly pledged during the campaign to fix the woes at the department and said he would "take care of great veterans." But he also came under scrutiny for being slow in paying out money raised for veterans groups and for suggesting that "strong" veterans don't need treatment for mental health problems.

Others said to be considered for the post include former Massachusetts Sen. Scott Brown, Florida Rep. Jeff Miller and Pete Hegseth, an Army veteran and former CEO of Concerned Veterans for America.

Trump is also considering Jovita Carranza, who worked in President George W. Bush's administration, as his choice for U.S. trade representative. She served as deputy administrator of the Small Business Administration under Bush.

With just a handful of Cabinet posts to fill, Trump is facing some criticism for a lack of diversity in his senior team, which currently includes no Hispanics.